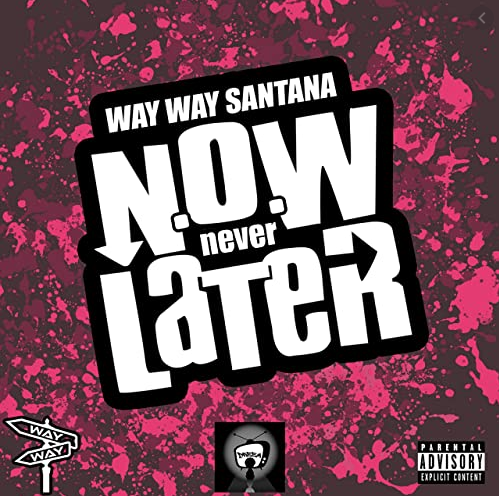 As she makes her way to the top of the game, Way Way Santana delivers a brand new project, ‘N.O.W Never Later’ The hard-hitting new project picks up where well-received past releases like “358 on a Bxtch” and ‘N.O.W Mix Tape Vol. 1’ left off, offering extra potent vibes from the North Richmond-based rapper. Released via Dreem Agency Recordings, the 8-track project provides a variety of sounds and themes, plus some classic samples as Way Way Santana gets into topics like life in her city, the grind, and how she’s destined to go down as a great. Real raps mixed with Hip Hop’s defiant voice put Way
Way Santana’s raw talent on full display, showcasing her knack for creating hard-hitting tracks that are currently putting her on the map.

Artwork as forward-thinking as the project complements Way Way Santana’s charismatic lyricism along with gritty, bass-heavy production that will leave listeners not only nodding to the beat, but ready to get their money up. After living with ‘N.O.W Never Later, it will be apparent to listeners that Way Way Sananta has been in it to win it, proving her doubters wrong with skill, passion and insight reserved for only the finest emcees. Since deciding music was her lane, Way Way Santana has not only racked up several thousand streams, but has also steadily built a fanbase full of loyal listeners, letting the game know it’s only a matter of time until Way Way Santana is a household name. Check in with ‘N.O.W Never Later’ on all digital streaming platforms and get a glimpse of the Bay Area’s up next: Way Way Santana. About Way Way Santana

Wayleah Hall aka Way Way Santana was born February 14, 1996 to parents Nakia Pain and Wayne Hall in the Northern Bay Area City of North Richmond, CA. However, tragedy soon struck afterward as her father lost his life to the deadly streets of Richmond, California. Today, now 21 years old, Way Way has been blazing the microphone since 15, evolving her skills to be one of the Bay Area's best young MC's with lyrical content and versatility in a wide range of topics, transitioning from upbeat party music to the deep dark gritty streets of Richmond's underworld.

Wayleah, has big plans on making her mark In the music game, promising not to be just another rapper or the "Girl" rapper from the Bay Area having been blessed with a clear plan for the future dropping projects with some of the Bay Area's hottest young rappers and beat makers displaying not only the desire, passion and drive, but also her knowledge and love for the business. In short, this young MC is clearly on the rise!