Varied. dynamic. melodic. knowledgeable. political, & connected .. each of these characteristics describe an aspect of Brooklyn, NY born rapper Hanz Gable’s persona and his debut EP, I’ll Drink To That, puts his full spectrum on display. “My style is versatile, man” he declares. “I could hit you with the old school flow, then come up with a melodic verse, and then the street flow. I have all different types of styles. I’ve just learned to do that,” he says, sounding much more like a seasoned vet than an artist serving up a debut disc. “I always thought to myself I never want to be boring. Whenever I jump on a track I want the people to guess what I’m gonna do next.”

Though I’ll Drink To That is his first collection, this is not his first rodeo. Hanz is far from a green, new artist. His career touches three different decades over which he’s released material independently, opened for Kanye West in London at the Brixton Academy and cashed checks as a ghostwriter. His first official release was with one of the true legends of the game. “The first thing I put out was with Slick Rick, when I was 15, back in 2007” he says. “We sold 20,000 units independently.”

Always active in the business and the culture, Hanz has taken his career in his own hands with his own venture, he’s teamed with another prolific performer, Freedom Williams of C&C Music Factory fame. With Williams, who he met in Fort Greene in 2010 . For the Palestinian American emcee, rapping is not just something he does, it’s part of his DNA. Growing up in the Hip Hop hotbed of his home turf ensured the culture was embedded in his genetics while Hip Hop homeschooling by an older sibling hardwired his brain, almost as if he was engineered for this. “I’m the youngest of 5 brothers,” says the Fort Greene resident. “My oldest brother, he used to play the classics - Nas’ Illmatic, LL’s Mama Said Knock You Out - all the classics he bumped, so I always had that in me, around me,” he says, crediting his older brother for giving him a firm foundation in Hip Hop history. His father, who came to Brooklyn from Palestine in 1973, had a grocery store, first, then a laundromat in the vibrant neighborhood, long before gentrification and hipsters were part of the landscape or lexicon. His family still maintains a house in their homeland. He grew up “mainly around blacks and Spanish, you know, going to school and everything. I used to play ball, and I was real good at it,” he states confidently.

Knowing his Hip Hop history has served him well. Fresh” his warm up single is a nod to the old school, from the beat to his flow, down to the video. “I redid “Planet Rock,” the seminal proto-electro-hop classic by Afrika Bambatta & The Soul Sonic Force. “I had the Cazals, I had British Walkers, I had that whole look,” he explains. “We got everybody in the video - Grandmaster Jazzy Jay, who actually did the scratches on the track, Jazzy Joyce, Roxanne Shante, Kangol Kid, Ralph McDaniels, Turbo, Grandmaster Melle Melle and Bambatta,” he proudly proclaims. “People in Hip Hop gotta know Melle Melle and Bambatta. You gotta know who the godfathers of Hip Hop are, who Kool Herc is. I think Hip Hop needs it. You need to know and understand where Hip Hop came from.”

The EP is a mixture of styles, displaying Hanz’s versatility and his love for melody and songwriting, as well as some of the connections his Brooklyn roots have blessed him with. “My man Fame, he’s on my EP, too.” One half of the legendary Mash Out Posse, Fame brings his urgent, distinctive, pavement proven rasp to two cuts. “Yeah, that’s my brother, man. That’s my dude,” says Gable of the BK Triple OG. On the politically tinged “TSA”. A lot of rappers claim to be straight without rap due to profits from inscrutable endeavors done in a previous incarnation. But Hanz has a lucrative, legit and legal hustle that you can’t knock. “What’s crazy is it was something I always wanted to do.” As a kid he says, “I always had a tape recorder. I would buy an instrumental beat cd and just write my own rhymes and just come up with different melodies, man. I just loved making melodies. Just to connect the verse with the pre-hook, the bridge with the chorus, just dumbin’ out 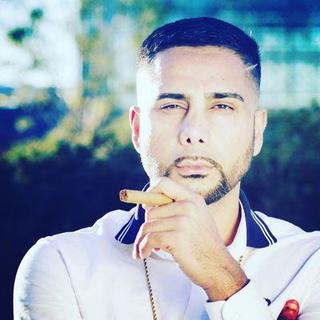