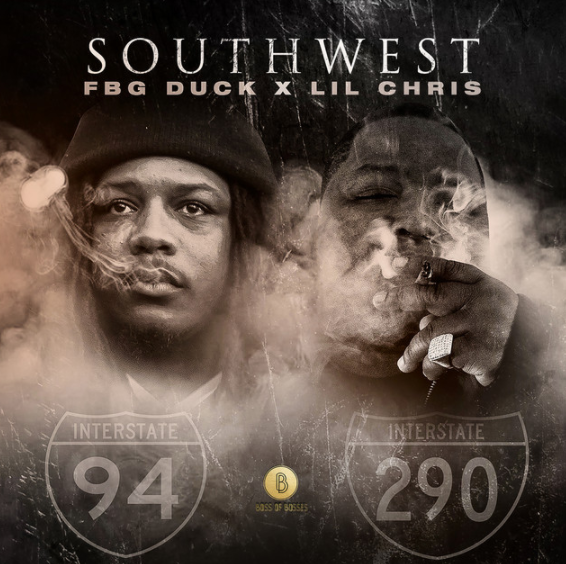 Southwest is a 16 track album from Chicago based artists Lil Chris and the late FBG Duck. Originally scheduled to release on September 14th 2020, the date was pushed back due to the untimely demise of collaborating artist FBG Duck. To pay tribute to the late rapper, 7 of FBG Duck's songs were released to the public. They were received with positive reviews and only added to the excitement of the fans for the upcoming project. Upon its release on Nov 30th 2020, Southwest charted at #50 on USA Hip-hop/Rap Itunes Charts. This success was welcome but not unforeseen due to the fanfare both artists possess. The chemistry of both artists shines throughout the album as well as their reflections on their respective life struggles and stories.

Looking back at both artists' lives, it is hardly a surprise that their sound holds a lot of meaning, influence, and flavor.

Christopher Ward, a.k.a Lil Chris, and Carlton D. Weekly, a.k.a FBG Duck first met in Chicago's bustling music scene back in 2015. Both artists were on their musical journeys, with Lil Chris producing music in his own home music studio. FBG Duck made the most of this partnership as they started having joint recording sessions and made well over 50 songs as a duet, not to mention the other 200+ plus they wrote and produced.

Lil Chris has seen his own bumps on the road as he was raised in a packed household and dropped out of high school to pave his own way. According to him, he was raised in a neighborhood that was teeming with violence and drugs. Despite these negatives, he was able to focus on his music and craft his own sound.

FBG Duck had a similar life path that was related to gangs and violence. This never stopped him from reaching new heights, especially with his hit single 'Slide' that reached over 53 Million Views on Youtube. Sadly, the artist passed away on August 4, 2020, and never saw the success of a project he worked hard on.

Southwest is available on major streaming platforms for the world to enjoy.