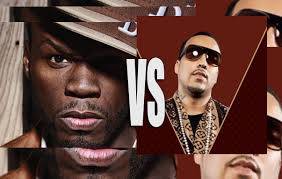 50 Cent reveals that prior to his beef with French Montana, he knew the rapper and French actually helped him out by selling out DJ Khaled.

Yesterday 50 Cent joked about French Montana and his music career, dubbing him the "new Ja Rule." Today, as more interview footage surfaces with 50 Cent while he is on his full promo tip, 50 reveals that he knew French Montana for awhile, during his DVD days.

While talking to Big Boi on Power 106, 50 is asked what his relationship was like with French prior to his success, "I ran into him a few times, he was like a DVD dude. He would come and shoot DVDs and stuff [as the camera person]. You could tell he always wanted to be an artist, or be a part of being seen," 50 said.

Fif goes on to reveal that during the period of time he was beefing with MMG boss Rick Ross, the Bad Boy rapper actually helped him out by selling out DJ Khaled and giving him the tape of footage from Khaled's mother's house which he released in 2009. "When I got into it with Rick Ross and Khaled, I saw Khaled at the BET Awards when that happened, but I don't actually remember seeing Ross, that sparked his interest or the things he said on his record to start. But I think that's a part of hip-hop, where a new artist attacks an established artist in order to generate the interest. That happened, I didn't know who Rick Ross was, so I had to take a look. I do my homework, I find somebody who know somebody, that can give me some information, like who is. Frenchie, they got me the tape of his mother's house, where his mom's work at, the other cribs, the studios [Khaled's tape]. I ain't taking no Ls." Comment by JODYPABLO DOIN #'S on November 30, 2012 at 8:09pm
This shit crazy watch them niggaz in ur circle

Comment by Dee Jordan on November 30, 2012 at 8:00pm
Roflmao and smh! Did he say "come catch this fade monkey" bahaaa thats it Im calling my graphic designer I need 500 shirts Hot off the press. Lol