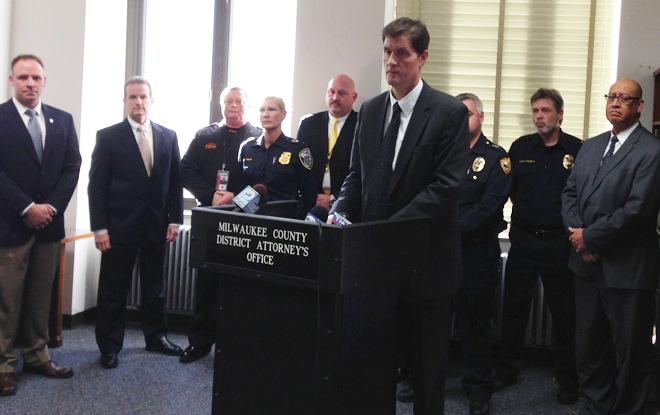 The suspects are associated with a criminal gang called the East Side Mafioso and are believed to be linked to about a dozen fatal heroin overdoses, Milwaukee County District Attorney John Chisholm said Wednesday in announcing the arrests.

"The organization put a staggering amount of heroin into this community," Chisholm said.

The operation began in 2013 and was led by the Milwaukee High Intensity Drug Task Force, which involves local and federal law enforcement partners. During the investigation, officials seized 10 handguns, a rifle, more than $21,000, eight vehicles, 326 grams of cocaine and 422 grams of heroin. Two alleged suppliers were arrested during a traffic stop in which an additional 150 grams of heroin were found.

In August, investigators obtained authorization to use a wiretap — which is fairly rare in state investigations, Chisholm said. The wiretap revealed that suppliers were selling about $4,000 worth of heroin every day. Those who purchased and used the heroin came from about 20 municipalities in Wisconsin, ranging from Hales Corners to West Allis to Oconomowoc.

On Nov. 4, authorities executed a search warrant at a residence that also contained a day care center and found guns and drugs, including 100 grams of heroin. They also found their main suspect, Charles Ortiz, suspected of being the ringleader of the operation.

The next day, investigators discontinued the wiretap, executed 10 search warrants and arrested 45 of 53 suspects on state charges. Many of the suspects have yet to appear before a judge, and criminal complaints against them were not immediately available. Ortiz, who is from the Milwaukee area, was the only suspect named by authorities on Wednesday.

In addition to Ortiz, officials also arrested five suppliers of heroin and/or cocaine, two of whom reside in Illinois. Another supplier was learned to have obtained heroin and cocaine from Illinois, as well.

"It's by far the most common route that they take. They bring it up through Chicago — Chicago is somewhat of a distribution point for all Mexican cartels — and that's who's bringing up the heroin to that particular area," said Jim Bohn, assistant special agent in charge of the Drug Enforcement Administration in Milwaukee.

The law enforcement operation separated suspects into three groups, Chisholm said. Those who are heroin users were arrested, released and immediately directed to treatment programs. The dealers face prosecution. Those who can be connected to a heroin overdose death will be reviewed for what are known as Len Bias reckless homicide charges.

Bias was a rising NBA star who died of a cocaine overdose in 1986. Subsequent laws that stiffen the penalties of providing drugs in fatal overdose cases are known as Len Bias laws.

"We're not naive enough to think that this is going to stop heroin use in our city, but this is one approach that we're taking," Chisholm said. "It's a very concerted unified approach that balances everything: our need to prevent this, our need to treat it, but it's also to hold accountable the people that are putting his poison into the community."

The approach was praised by Milwaukee Common Council President Michael Murphy, who was the key organizer of a regional summit about heroin and opiate addiction in the summer and has planned another program for next week.

"I'm glad to see the district attorney made the arrests and recognized the treatment component," Murphy said.

Heroin addiction has affected many families and communities throughout the state in different ways, he said.

"My home was broken into last month, and the individuals ... were all heroin addicts," Murphy said. "The reality is it shows you the pervasiveness of it."

Although public awareness of heroin addiction has steadily increased, the problem has continued to grow.

"It's a supply-demand issue," Murphy said. "I think the demand is unfortunately increasing, and that's why we need to do a much better job of reaching out to children and young adults on prevention and providing options for addicts."

In 2013 in Milwaukee County, 67 people died of heroin-related overdoses — a 34% increase from the prior year — and in the first three months of 2014, the medical examiner's office recorded 20 heroin-related deaths. Statewide, the number of heroin overdose deaths has risen just as dramatically, with well over 200 last year.

Law enforcement and health care officials say there is a strong link between prescription drug abuse and heroin. Once hooked on prescription drugs, users make the switch because heroin is cheap — about $15 a hit — and accessible.

Under outgoing Attorney General J.B. Van Hollen, the Department of Justice started a statewide heroin prevention awareness campaign a year ago called The Fly Effect Heroin Prevention Campaign. The primary goal was to get teenagers in particular to understand that making one small decision can spiral out of control. The campaign noted that the number of teens experimenting with the drug is increasing exponentially, and a majority of people who try it once, try it again.