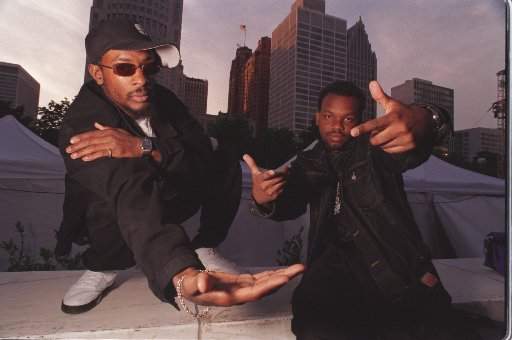 (Seen on the left)

The circumstances of his death remain unknown, associates said this afternoon. Baatin's body was found this morning in the 14000 block of Anglin Street and is now at the Wayne County medical examiner's office, said family friend Ty Townson.

Funeral arrangements are not yet set. Friends and family members will gather at 8 p.m. Sunday at Elements Gallery, 2125 Michigan Avenue in Detroit.

Baatin, who turned 35 in March, had left Slum Village in 2002, later telling the Free Press he had been diagnosed with schizophrenia. He continued to record and play occasional live dates before returning to the Slum fold for the group's upcoming album, "Villa Manifesto."

He was with the group for its gig at June's Rock the Bells Tour stop at DTE Energy Music Theatre, and last week performed in a video shoot for Slum's new single, "Cloud 9."

"This is just very shocking," said longtime group associate Biba Adams. "We were all hoping this would be the return of the original group."

"Baatin will be missed," Slum Village's T3 told the Free Press in a statement. "I'm glad we got a chance to work together before he passed. We lost another Slum soldier, a dear friend and a brother. He touched many lives."

Word of Baatin's passing circulated quickly this afternoon in music circles both locally and nationally, where Slum Village has long been an exalted name in underground hip-hop.

""Deepest sympathy to the family friemds and fans of Slum Village on the passing of Baatin," Yancey's mother, Maureen Yancey, said in a statement. "We loved him and his kind heart and spirit he will be forever be in our hearts."

"He was a very spiritual brother," said Detroiter Khalid el-Hakim, founder of the Black History 101 Mobile Museum. "He brought a spirituality to Detroit hip-hop that you didn't see with other artists. That's what he was known for."

Comment by DJ HEN HOUSE on August 3, 2009 at 3:16am
YO JUST WANT TO SAY THANKS TO MY CORE FAM FOR REACHING OUT YES WE HAVE LOST ANOTHER GREAT MC FORM THE MOTOR CITY EVERY STRIP CLUB DJ HERE PUT A SET DOWN FOR HIM TONITE AS WE THANK HIM FOR BEING WHO & WHAT HE WAS FOR ARE CITY I GUESS MY ONLY THING NOW HOW MANY MORE OF MY MC WILL LEAVE B4 MY CITY GETS THE PROPS WE SHOULD BE GETTING ITS TIME TO STOP SAYING WE NOT GOING HERE CAUSE OF THIS DUDE OR WE NOT FUCKING WITH THEM CAUSE OF THAT ITS TIME TO SAY IF THE MUSIC IS GOOD LET GET IT AND MAKE IT WHAT IT COULD BE NOT TRYING TO VENT JUST SAYING I KNOW WHAT WE HAVE HERE ITS TIME FOR THE REST OF THE WORLD TO SEE THAT AND UNDERSTAND IT CAUSE 1 WAY OR ANOTHER WE COMING RATHER THEY LIKE IT OR NOT AND WHEN WE GET IT LOOK OUT CAUSE WE GONE DO IT FOR MC BREED/BIG PROOF/WIPEOUT/BLADE ICEWOOD/J DILLA /BAATIN JUST TO NAME A FEW HOPE TO SEE EVERYBODY 2 @ THE RETREAT
DJ HEN HOUSE(AKA) MR BUMBY JOHNSON

Comment by DJ PRINCE ICE on August 3, 2009 at 1:10am
much love and condolences to the family of Baatin from the world of dj's, fans, friends & long-time supporters of Slum Village.

Comment by dj faze on August 2, 2009 at 6:58pm
my prayers to the family rest in peace my brother you will be missed

Comment by Miss V*Bella on August 2, 2009 at 5:06pm
RIP BAATIN, may God comfort your family in their time of grief.

Comment by Slo V & Retro - Mike-205th Music on August 1, 2009 at 6:05pm
RIP to Baatin, you will be greatly missed but live forever through your classics. I'll be bumping "Tainted" in the car in your memory. Much respect from Slo V and Retro and the 205th Music Family in Miami. Peace to the family and freinds affected. You'll be in our prayers.
-Mike - 205th Music