A Church of God in Christ member claims he’s prayed the gay away, but others aren’t buying it.

Last week the Church of God in Christ held its 107th Holy Convocation convention in St. Louis, and estimates have it that 28,000 people gathered this year. And if statistics are something being talked about, some of those people are probably gay. But if COGIC Superintendent Earl Carter had his way, they’re now formerly gay because of the power of prayer.

In a video making the rounds Monday, the superintendent laid hands on a churchgoer who claimed that he was no longer gay and would no longer wear makeup or women’s clothing because he “likes women, women, women.”

Take a look at the video:

According to PimpPreacher.com, Carter was consumed with anger because the convention seemed to be a coming-out party for its gay congregants, and he went off on pastors and gay choir directors.

The unnamed churchgoer isn’t the first one to say that prayer helped him rid himself of his homosexuality. There’s the infamous Antoine “Bedroom Intruder” Dodson, who rose to viral status after preventing a burglar from raping his sister. Two years ago Dodson claimed that he was no longer gay because of his newfound religion.

“I have to renounce myself, I’m no longer into homosexuality; I want a wife and family, I want to multiply and raise and love my family that I create. I could care less about the fame and fortune, I’ve giving all that up to know the true history of the Bible. For I am the true chosen Hebrew Israelite descendant of Judah,” Dodson stated on a now-deleted Facebook post.

Then there’s the ever-popular Donnie McClurkin, who also claims that prayer rid him of his gayness.McClurkin’s newfound anti-gayness even got him cut from a Martin Lu... concert series last year after Washington, D.C., officials received complaints about his negative stance on homosexuality. McClurkin asserts that his homosexuality was caused by being sexually abused as a child, and prayer was the only thing that helped.

In a 2013 interview with Roland Martin, McClurkin stated, “You can’t call me a homophobic if I’ve been a homosexual. That’s quite a stretch.”

But is praying the gay away even a thing? Those on social media don’t think so: 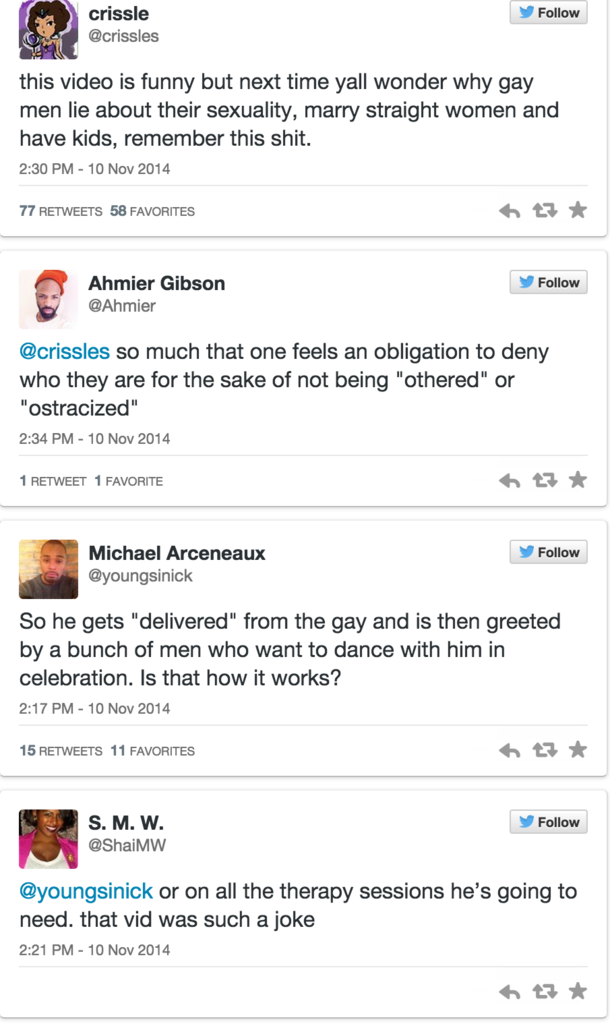 Religion and homosexuality will always be a touchy subject, but with a church that boasts membership numbers upward of 6 million, let’s face it: Chances are, some of the COGIC congregation will be gay. That’s a lot of praying the gay away. Here’s a novel idea: How about just letting people be who they want to be, and let whatever higher power they believe in deal with them on their own time?