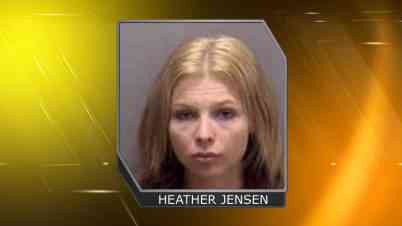 GRAND JUNCTION, Colo. – A Western Slope woman accused of child abuse in the death of her two children, left them in a running SUV while she was having sex with a man, investigators said Wednesday.

Heather Jensen was arrested in Florida on an arrest warrant out of Mesa County.

Jensen’s two boys, Tyler, 4, and William, 2, died of overheating while sitting by themselves in her SUV in a parking lot on the Grand Mesa near the Powederhorn ski resort.

The coroner ruled their deaths were accidental.

However, according to her arrest affidavit, Jensen is charged with two counts of child abuse resulting in death, two counts of criminally negligent homicide and one count of false reporting to authorities.

The arrest affidavit says Heather Jensen met Colten Childers near Powderhorn Ski Resort, in the mountains outside Grand Junction on Nov. 27 around 4 p.m. The affidavit said Childers was a man she was “having an affair” with.

Tyler Jensen, left and William Jensen both died after being left in their mother’s running SUV in Grand Junction on Nov. 27, 2012. (Photo: Robert Mathena)

Jensen showed Childers her two sons, who were sleeping in the back seat of her Toyota SUV. The two talked outside their vehicles till about 5 p.m., then Jensen entered Childers’ vehicle, the affidavit said.

About fifteen minutes later, Jensen exited Colten’s car and started her Toyota. She then got back inside his truck, the affidavit said.

Childers said over the next half hour, he saw Tyler Jensen opening the rear passenger door several times. He said “the door opened only as far as his, Tyler’s, arm could reach,” the affidavit said.

Jensen got out of Childers truck and gave Tyler her cell phone so he would have something to play with, the affidavit said. Childers told investigators Heather said when she returned to his vehicle that she did not like the boys opening the door “so she put the child door locks on.”

Then Jensen and Childers went to the backseat of his truck and started having sex around 6 p.m., the affidavit said.

Childers said “when they finished they both got dressed and got out of his truck. Colten [Childers] said he smoked a cigarette.”

She then got into the SUV and drove off, the affidavit said.

Childers said he left the area and started driving home, when he saw her SUV parked along the road. According to the affidavit, Childers went to help Jensen, who had pulled Tyler out of the SUV.

Childers said he checked on William and saw he was “really pale” and could see he was “not breathing,” the affidavit said.

He then went to Jensen saying William needed help. Jensen got up and went to William and Childers sat with Tyler who “seemed ‘really warm’ to the touch, but not sweating,” the affidavit said.

Childers said Jensen asked him to lie to the police about what happened. “She wanted him to leave when authorities showed up,” the affidavit said.

When paramedics arrived William had already died and Tyler was taken to a hospital, then airlifted to Colorado Children’s Hospital in Aurora. He died about a week later.

Investigators believe the SUV was left running for about 65 minutes, when the two boys were left inside.

During their investigation, detectives tested Jensen’s SUV, placing a thermometer inside it and leaving it running with the heaters on.

In one of the tests, where the windows were left up and the heater was running at full blast, the temperature inside the SUV was 125-132 degrees after just 30 minutes.

Childers admitted to investigators that he was having an “affair” with Jensen.  At the time she was dating Peter Eugene Stein-Gillette, 25.

Stein-Gillette and Jensen had only been dating for about two to three months, the affidavit said.

Records show that Jensen was married to Eric Brandon Jensen, and that Eric Jensen had died in a car crash in October 2012.

Stein-Gillette told investigators that “he was dating Heather [Jensen] while she was still married to Eric,” the affidavit said.