Bieber arrested along with Def Jam singer Khalil after they were drag racing on Miami Beach streets.

NBC6 posted an image of what it said were the cars that Bieber and his entourage were in when the arrest took place. The chopper shot shows what appears to be two Lamborghini's, one red and another yellow, as well as another red car in the middle. "#Lamborghini #JustinBieber was in when @MiamiBeachPD arrested him for #dragracing," read the caption. 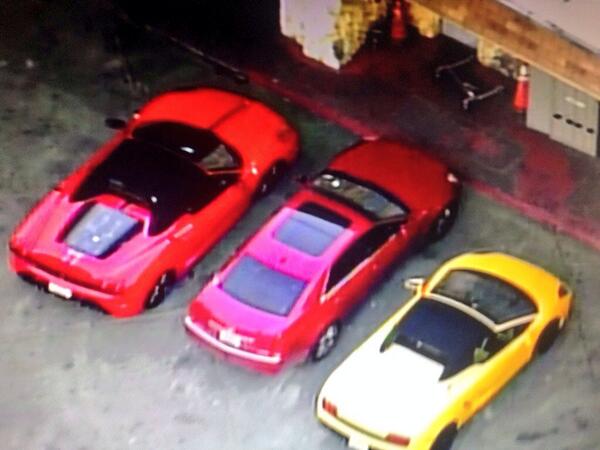 NBC6 also put up a video of the incident, seemingly taken by Bieber fans who were following the action on the city's streets. In the clip several unidentified women can be heard saying Bieber's name and then, "He's right there, he's right there! ... Oh my God, Justin just got pulled over," as shaky footage shows a yellow Lamborghini racing down the street. Police sources told the station that Bieber may have also had drugs in his system at the time of the arrest.

According to CNN, a fleet of SUVs were blocking off traffic behind Bieber and Def Jam signee Khalil Sharief, 19, who police confirmed was the other person arrested and charged with drag racing and DUI. Sharief posted an image of himself behind the wheel of a Lamborghini just hours before his arrest, with the message, "Miami nights ridin thru yo city in that hot wheel."

Khalil also put up an image of Bieber in the yellow car with a woman identified as Chantal Jeffries. The photo, with a caption that reportedly read, "@chanteljeffries taking me for a ride in the lambo," has since been deleted from Bieber's account.

Another picture of Bieber posed in front of two Lambos with the caption, "Thanks to @loulavie and @internationallc for the whips," was also deleted from Justin's account. La Vie runs a luxury and exotic car rental service with offices in Miami and Palm Beach that offers rentals of a variety of cars including: Lamborghini, Ferrari, Maserati, Rolls Royce and Porsche.

The incident took place around 4 a.m. when police spotted Bieber's rented Lamborghini and another car being trailed by multiple SUVs, NBC6 reported. Police gave chase, though the vehicles were moving at such a high rate of speed it took them a "significant distance" to catch him.

In a video on TMZ, a group of unidentified people can be seen crowding around a yellow Lambo, followed by purported footage of the arrest. The site also claimed that unidentified police sources said Bieber was additionally charged with resisting arrest without violence and driving on an expired license. The former charge was said to be because Bieber refused to take his hands out of his pockets when ordered to do so by police.

Bieber, who has a fleet of expensive vehicles in Los Angeles, has hadcar troubles  in a Lambo before, including in March 2013, when he was warned by police in Dubai after his rented whip reportedly set off six speed cameras. A spokesperson for the Miami Beach Police Department could not be reached for comment at press time