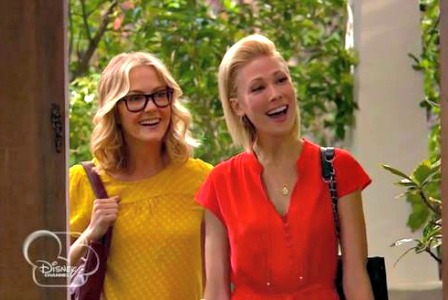 Disney took a controversial step when they chose to work a lesbian couple into a storyline of their popular show Good Luck Charlie. Is this a wrong move by this influential company, or is it realistic and inspiring?

Good Luck Charlie is in its final season, but with the introduction of a same-sex couple, they’ve made their own history — this is the first time such a couple has been depicted on a Disney Channel program, ever.

As more and more families of all types are included in mainstream media, the less of a big deal it will eventually be — but this move has simultaneously outraged some parents while getting a big thumbs-up from others. Where do you fall?

Some parents were not only disappointed in the story, but others were horrified to learn that their child’s favorite show would include same-sex parents. One Million Moms, an organization that has famously campaigned against other LGBT topics such as the J.C. Penney gay dads ad, began an email campaign last year when the plans for the show were announced.

"Gay relationships are immoral and we don't need Disney to be the one introducing these kinds of topics to our kids."

They said, “One Million Moms launched an email campaign in 2013 that urged Disney officials to abandon their plans to corrupt the children’s network with LGBT content. However, Disney officials have not responded to the thousands of emails protesting their plans. Disney has decided to be politically correct instead of providing family-friendly programming. Disney should stick to entertaining, not pushing an agenda.”

And they are not the only people who feel this way — many parents have condemned the show and have stopped allowing their children to viewGood Luck Charlie. "I was very disappointed when I heard about this a few months ago" says Melanie, Texas mom of three. "I told the kids that they could no longer watch the show. Gay relationships are immoral and we don't need Disney to be the one introducing these kinds of topics to our kids. My husband and I certainly won't shelter them from homosexuality forever, but we aren't going to promote these relationships as positive things either."

However, not all parents feel that way — at all. “Bravo Disney,” shares Amanda, mom of four. “They are not really pushing an agenda — they are simply depicting real life. Chances are, your child will be friends with a child who has same-sex parents, if they’re not already. Having two moms or two dads is a reality for some kids, just like those who live in a single-parent household, who have divorced parents or have lost a parent in another way. Disney is working to help all children feel like a normal part of society, and hopefully future generations won’t blink an eye at storylines like these.”

"Anyone who thinks this is sexualizing children, or pushing an agenda, is crazy."

And Elizabeth from Iowa feels the same. “We watched it with the girls and I thought it was awesome, had no idea they'd be on there,” she tells us. “The kids thought it was no big deal even though we don't know any families like that. We have just always told them they can love whoever they want, and we are lucky enough to live in a state that they can marry who they want, too. And that hopefully by the time they grow up it will be allowed everywhere.”

Julie, mom of two, agrees. “Anyone who thinks this is sexualizing children, or pushing an agenda, is crazy,” she explains. “The Disney Channel has shown that it’s a progressive media outlet that seeks to represent many types of families, and this is just another example of a family dynamic. Nothing more, nothing less.”

Watch a clip from the Good Luck Charlie episode below:

WHAT DO YOU THINK??

Wow I believe in equal rights but as a parent I feel like they cross boundaries when mainstream media makes move like this because they don't know how it will affect children watching.