[WHOA] The Most Dangerous Place In America To Be Black is Omaha, Nebraska" 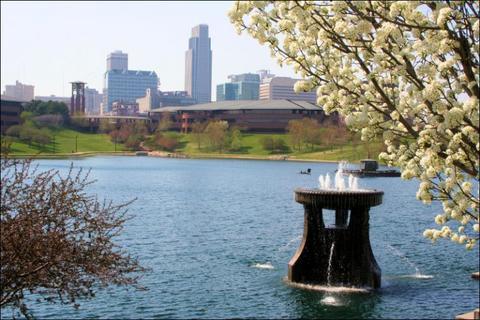 Murder rates in the United States continue to plunge to historic lows -- even the blood-soaked streets of Chicago recorded a 16 percent drop in homicides last year, with the city recording its fewest killings since 1965. Still, for uncounted African-Americans, the carnage persists in deprived neighborhoods across the country. While news of gang killings and other forms of mayhem in the grim streets of Philadelphia, Chicago, New Orleans, Oakland, Calif. and other metropolises dominate headlines, the city with the highest incidence of black murder victims might raise some eyebrows: the seemingly peaceful, farming state of Nebraska's largest city, Omaha, a city of 420,000, located along the banks of the Missouri River.

The Violence Policy Center (VPC), a Washington, D.C.-based research and advocacy group that promotes gun control, determined that in 2011 (the latest year in which comprehensive national data is available), 30 blacks (including 27 in Omaha) were murdered that year in Nebraska -- meaning, the state had a black homicide rate of 34.4 per 100,000 people, double the national average of black victimization. Omaha (and particularly its black neighborhoods in the deprived northern and northeastern parts of the city) accounted for almost half of all recorded homicides in Nebraska -- which, overall, sported a relatively low murder rate of less than four per 100,000 people. (The U.S. as a whole has a murder rate of 4.44 per 100,000 people.) Ninety percent of these murders came from the bullet of a gun.

The data further revealed that two black homicide victims from that year were children (less than 18 years old), while the average age of the victim was 28. The violence has continued into 2014 -- as if to illustrate the parade of killings that have ensnared parts of Omaha, on Jan. 15, a 5-year-old black girl named Payton Benson was gunned down by a stray bullet. “Gun violence is a public health crisis that touches all Americans, but the impact on African-Americans is especially devastating,” said VPC executive director Josh Sugarmann. “This report should be a wake-up call for our elected officials to address the disproportionately high homicide victimization rate among black men and women. The longer we wait to act, the more lives will be lost.”

Since 2009, Nebraska's ranking on this grim scale has jumped from 11th place to the top spot. Missouri, Michigan, Pennsylvania and Oklahoma feature the highest black homicide rates, just behind Nebraska. “This is not an abstract concept,” Sugarmann added. “This is real people’s lives.”

On an absolute basis, the homicide numbers for Omaha are dwarfed by murder data from places like Chicago and Detroit, since Nebraska has a small population. With about 1.9 million people in the entire state (about two-thirds the size of Chicago), Nebraska is overwhelmingly white. About 88,000 black people reside in Nebraska, accounting for only about 4.7 percent of the state's populace. The black community is concentrated in Omaha, and to a lesser extent, in the capital city of Lincoln, about 50 miles to the southwest, according to the 2012 U.S. Census.

Moreover, in 2012, according to FBI data, 80 percent of all murders committed in the entire state of Nebraska took place in North Omaha. Thus, violence in Nebraska is heavily concentrated in the predominantly black neighborhoods of northern and northeastern Omaha, an area rife with the familiar urban ills of poverty, gang activity, high unemployment and substandard housing conditions. "Northeast Omaha has the highest level of concentrated poverty in the state; it has the highest concentration of unemployment," Willie Barney, president of the Omaha Empowerment Network, told the Journal Star newspaper of Lincoln. "If you look at any map across the country that has heavily concentrated poverty, heavily concentrated unemployment -- in places like Cincinnati, Newark (N.J.), Baltimore, Chicago -- you'll see the exact same thing." Indeed, unemployment in north Omaha is estimated at 25 percent, in stark contrast to a 4 percent figure for the state (one of the lowest jobless rates in the country).

Adam Fletcher, who runs a blog called NorthOmaha.blogspot.com, catalogues the grim facts of life in the city, calling poverty in the city “staggering”:

* Omaha ranks eighth in the nation for black unemployment.

* Omaha ranks first among U.S. cities for the total number of African Americans who qualify as low-income.

* One out of three of African American families in Omaha live in poverty.

* Six out of 10 black children in Omaha live in poverty.

* More than one-third (35 percent) of black students in Omaha do not graduate from high school.

Omaha police estimate that at least one-half of all killings in the city are gang-related, although some appear to be random (like the Payton Benson tragedy). "We had gangs when I was growing up; it's the attitudes that have changed," said Nia Williams, 32, a resident of north Omaha and member of gang-intervention group called Impact One. "Now, even when one of these kids loses a friend to a shooting, they don't even stop to grieve. Used to be, you'd go to a funeral, and kids would be wearing an RIP [Rest in Peace] pin. Now, they're wearing four or five RIP pins. That's what their legacy is.”

Omaha police chief Todd Schmaderer has responded to the crisis by restructuring his department and assigning more officers to specific gangs. “It's Vietnam around this block,” Larry Davis, a 50-year-old north Omaha resident, told the Omaha World-Herald newspaper. “These young guys with these guns, they just don't have a value for life.” Quite obviously, the prosperity that the rest of Omaha enjoys has completely bypassed the northern parts of the city, which is scarred by hundreds of condemned properties, among other woes.

“If North Omaha is to be a sustainable community, and that means it really takes care of itself and it doesn't need to be a welfare community, we have to have a different mindset,” said Michael Maroney, president of Omaha Economic Development Corp. “That does not mean we forsake those in need, but we have to create the atmosphere by which we not only bring back people with higher incomes, but we elevate those people within upward. We must create a community that is generating resources that turn around the community by creating jobs, creating opportunity.”

However, Susan V. Koski, Assistant Professor of Criminology & Criminal Justice at Central Connecticut State University, cautioned that the data must be perceived through the prism of skepticism since the population numbers in Omaha and Nebraska is so small. “It is important to look at the raw numbers rather than the percentages,” she said. “All data must be looked at critically as there are a number of factors, including the data source, funding party, and reporting media.”