A registered nurse, cannabis activist, mother to two daughters and an adopted special needs son, Debi Madaio was once the influential force behind not only NJWeedman’s Joint, but also NJWeedman.com – the longtime marijuana legalization advocate formerly known as Ed Forchion. Now celebrating several cannabis ‘wins,’ including the opening of her new shop, The Weed Stalk in Somerset, NJ; the awarding of a New Jersey conditional cannabis license; and inclusion on the Insider NJ 100: Cannabis Power List; Madaio believes her biggest triumph is as a domestic violence survivor. Madaio is penning a tell-all book about her experiences called “Surviving NJ Weedman.”

Trenton, NJ - Debi Madaio is recognized by many as Trenton New Jersey’s “First Lady of Weed.” As the former majority owner of NJWeedman's Joint, the once popular marijuana-themed eatery located in the state’s capital city, Madaio has defiantly honed her legacy as a heroic cannabis mompreneur. A registered nurse, cannabis activist, mother to two daughters and an adopted special needs son, Madaio was also the influential force behind not only NJWeedman’s Joint, but also NJWeedman.com – the longtime marijuana legalization advocate formerly known as Ed Forchion. Now celebrating several cannabis ‘wins,’ including the opening of her new shop, The Weed Stalk in Somerset, NJ; the awarding of a New Jersey conditional cannabis license; and inclusion in the Insider NJ 100: Cannabis Power List; Madaio believes her biggest triumph is as a domestic violence survivor. Madaio is penning a tell-all book about her experiences called “Surviving NJ Weedman.”

Running a small business while working full time as a registered nurse and caring for a special needs son was challenging enough to say the least but like most DV victims, Madaio remained silent about the abuse she suffered for six years while maintaining a supportive stance for her business partner and mate. It was New Jersey’s daily paper, The Trentonian, that first went public with the abuse Madaio suffered, releasing a leaked and very disturbing video surveillance footage of one of many alleged physical attacks on Madaio.
Located just across the street from the Trenton City Hall, NJWeedman’s Joint was initially founded and financed by Madaio in 2015 and eventually garnered national media accolades for its contribution to cannabis culture. In March 2017, the eatery came under scrutiny per an undercover operation and raid that led to Ed Forchion’s (aka NJWeedman) arrest and incarceration. 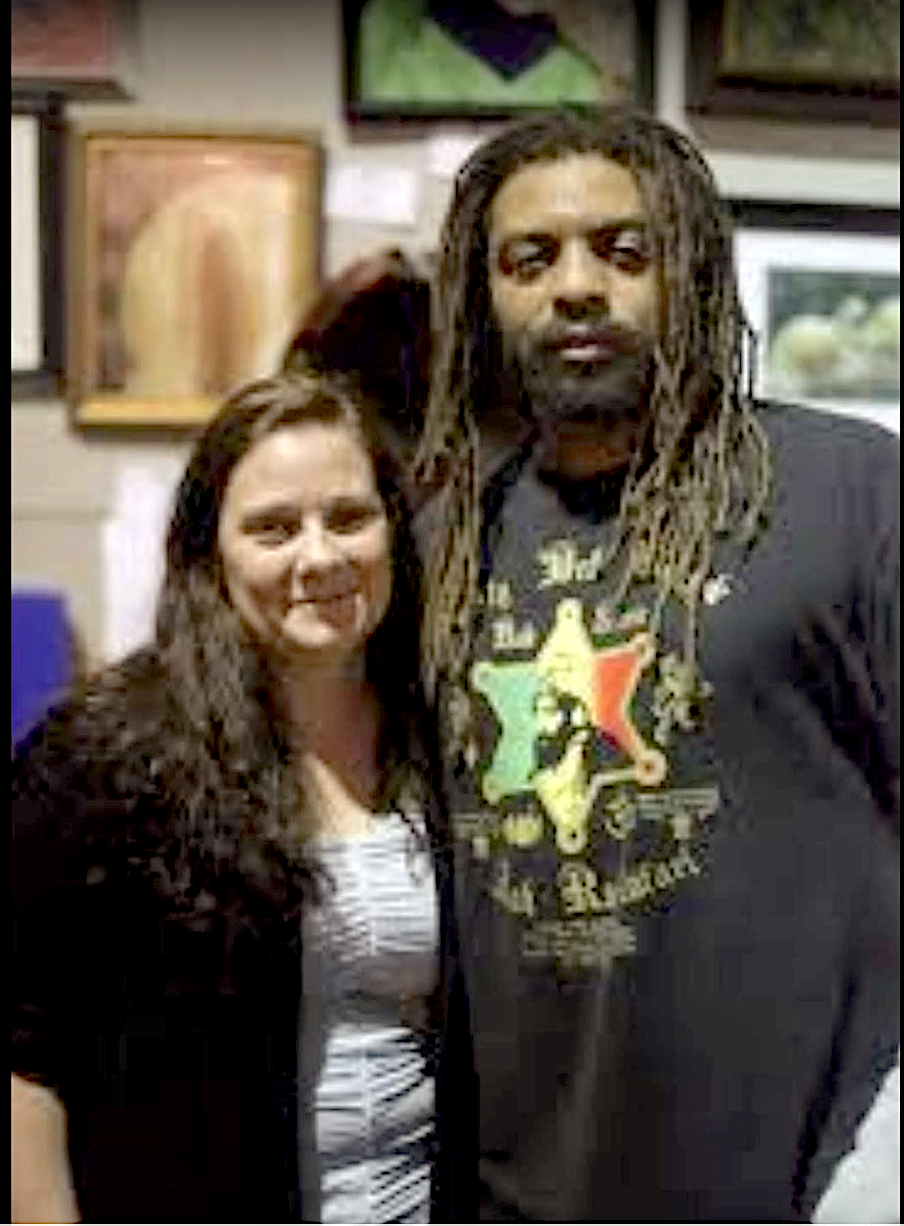 Forchion’s arrest garnered him 447 days in prison, leaving Madaio not only publicly fighting for his release, but also for the survival of their business, which she solely funded during his incarceration. With Madaio’s financial support and relentless efforts, a journey fully documented on Facebook by both parties, Forchion was eventually cleared of charges. The two became Bonnie & Clyde archetypes for some six years, rallying to spearhead the legalization of marijuana in Trenton.
NJWeedman’s Joint’s ambiance, created by Madaio, mirrored an actual marijuana grow room with curtains, tablecloths and chairs designed and fashioned after marijuana leaves. There were also live, outdoor music performances and show offerings which were streamed online. The locale was a popular tourist spot and media darling, and Madaio in due course, opened The Stash Spot, a boutique accessories and smoke paraphernalia shop, inside the business.
Over the years, Madaio estimates she invested over a half-million dollars into NJWeedman’s Joint, almost financially crippling herself. She asserts that she was forced out of the business when the establishment became profitable. NJWeedman’s Joint, the restaurant, has since spawned numerous spinoff enterprises including a lucrative, though not yet legal, marijuana dispensary in Trenton, The Joint of Miami, a hip hop nightclub and Forchion Cruises in Miami, FL.
“I think it’s important I share all of my truth, the good and the bad, the losses and the victories,” asserts Madaio. “I’m in a place now where I’m finally empowered as a DV survivor because the truth is, the entire ordeal nearly killed me. The physical, mental, and emotional battering were one thing, but to be forced from my business was beyond devastating.  My new storefront, The Weed Stalk LLC, is symbolic on so many levels.  I’m the tiny seed that was covered in dirt and darkness, yet I was still able to grow and reach for the light.”

Madaio, a lifelong resident of New Jersey, was recently awarded a conditional recreational license from the New Jersey Cannabis Regulatory Commission, which allows her to proceed with securing a final recreational license to operate The Weed Stalk as a marijuana dispensary. As the sole proprietor of one of the first few woman-owned dispensaries in the state, her goal is for The Weed Stalk to be a safe and supportive haven for all women in the cannabis community.
However, her inclusion on Jay Lassiter's "Insider NJ 100: Cannabis Power List" is the icing on the cake. She is ranked as among the state’s most politically influential voices in the cannabis movement, including advocates, lobbyists, lawyers, caretakers and industry professionals positioning themselves in New Jersey’s budding multibillion dollar cannabis industry.
“My former partner, always led me to believe that without him, I would have no identity. Like so many DV survivors, I was made to feel like my role, my support and my financing was inconsequential to the bigger picture.” reveals Madaio. “But I’m still here, I’m thriving and more importantly, my contribution to our community is still being seen and recognized. As a nurse and a mother, I’m a natural caregiver so my biggest embarrassment was how I thought I let down my kids. Their future was almost stolen from them.  If just one woman hears my story and is empowered, I am eternally grateful.”
Madaio has an undergraduate degree in criminal justice (BSCJA) as well as in Nursing (RNBSN). While currently working full time, she envisions The Weed Stalk providing work and income closer to home and nearer her special needs son. NJWeedman’s Joint was once called ‘the happiest place on earth’ by Extraction Magazine and Madaio’s mission is to resurrect that vibe again. She is not just a facade of happiness, it's authentic now and no longer veiled under the guise of repressive misogyny.
Per the recent wave of DV survivor related docuseries on streaming platforms like Netflix, including “Bad Vegan: Fame. Fraud. Fugitives,” “Untold, Deal With the Devil,” and “Dirty John,” perhaps her #MeToo marijuana story will be told onscreen as well.
Climb the Weed Stalk with Debi Madaio on Facebook at The Weed Stalk, on Instagram at @theweedstalk and online at https://theweedstalk.com.  Visit The Weed Stalk storefront at 646 Hamilton Street in Somerset, NJ.