Lakers Persevere To Hold On and Win Game 2 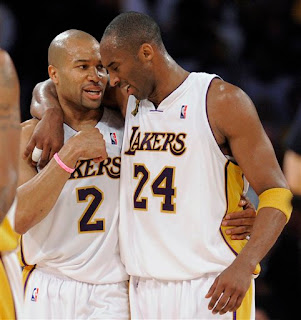 Game 2 went exactly the way I figured game 1 would go. A close game, that went down to the wire with great shooting from the Magic, and a great performance by Kobe Bryant. Once again the only surprise was the way the Lakers contained Dwight Howard.

Howard did score 17 points, but he had to work for every single basket. They doubled teamed him every time he started to back down his defender, but unlike Cleveland they were still able to maintain the whereabouts of Orlando’s sharp shooters. Well all except for Rashard Lewis.

Lewis went 6 for 12 from the 3-point line scoring 34 points in the Magic’s 101-96 loss. He was the only member of the Magic to really get it going in the first half scoring 18 of Orlando’s 20-second quarter points.

Hedo Turkoglu got it going in the second half hitting a few big shots to help bring send Orlando back in the fourth quarter. Turkoglu shot 3-6 from the 3-point line scoring a total of 22 points. He along with Lewis, and J.J. Redick hit major baskets that helped the Magic avoid losing in regulation.

Unfortunately they just didn’t have enough in regulation to steal home court from the Lakers as Courtney Lee missed two potential game winning layups. Those misses turned into opportunities for the Lakers who survived long enough to force the game into overtime where they eventually wrapped things up.

Bryant had 29 points and another 8 assists night, while Pau Gasol turned in 24 points and 10 rebounds of his own. Derek Fisher played his role and managed to hit shots in moments where Orlando thought they could pull away.

He finished the night with 12 points shooting 2 for 3 from the 3-point line. His shots all came at the worse times for the Magic though. Every time they either got ahead, or were about to even the score when they were trailing, Fish would cause a turnover or hit a big shot, or layup.

But the x factor once again for L.A. was Lamar Odom. Odom came in blocking shots to the tune of 3 total, and snatching down rebounds. Oh and I forgot to mention it he also scored 19 points coming off the bench which is two more than Orlando’s total bench.

The missing factor for the second straight game for Orlando was Mickael Pietrus. He fouled out of game 2 with only 2 points. He only took 3 shots all night, while trying to defend Bryant.

All in all it was a much better outing for the Magic, but you have to believe they’re heading back to Orlando feeling like they let this game get away from them. Their performance showed me that they’re as good as we expected them to be, and that at home they will be a problem. Let’s not forget the Lakers are at home and realistically they’re suppose to win those first two games, but now Orlando has to defend their house.

The bad news is Phil Jackson and the Lakers know how good they are too and will make the necessary adjustments to try and steal one or two games from the Magic in Orlando. Orlando has three straight home games, and it’s a must that they win at least 2 out of 3 otherwise they risk watching the Lakers being crowned NBA champions on their floor.