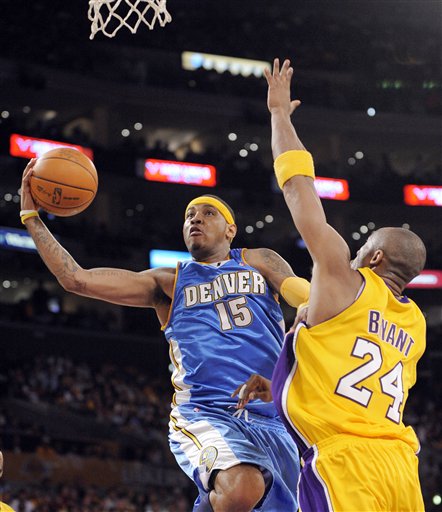 In game 1 the Nuggets came out hot, clicking on all cylinders offensively and defensively, last night was the exact opposite. Well, at least the start of the game was different as well as the result, but the game itself was just as exciting.

At the end of the first quarter in game 1 the Nuggets led 31-23, in game 2 it was the Lakers who had a 31-23 lead at the end of the first quarter. The difference in Denver’s play was their defense, and their poor execution of on offense, and their missed free throws. Plus the lack of defensive rebounds, which gave the Lakers all kinds of second chance points, didn’t help either. The result was a 14-point lead for the Lakers early on in the second quarter.

Then something happened in the second quarter that few saw coming, and that was the 14-point run by the Nuggets bringing the score to a 51-40 Lakers lead. Then the Nuggets outscored the Lakers 17-7 in the last 5minutes of the half, thanks to a couple of threes by Linas Kleiza and Chauncey Billups. The score at the end of the half was 55-54 the Lakers. This gave Denver all the confidence they needed going into the second half.

In the 3rd quarter, Denver came out showing a lot toughness and managed to keep the score within 1, but it was Trevor Ariza who kept the Lakers going, scoring 10 of L.A.’s points. Had it not been for Ariza’s performance, Denver may have taken over in the 3rd quarter. Chauncey Billups had 9 and Carmelo Anthony had 6, along with help from the bench in the forms of Kleiza, and Chris Anderson.

In the 4th quarter it was the shootout that we all expected from the beginning of this series with Kobe taking over the game and finishing with 32 points versus Carmelo’s 34. But when the smoke cleared Denver had taken home court advantage from the Lakers winning 106-103. Billups added 27 points to offset Ariza’s 20 for the Lakers.

Pau Gasol added 17 points off of 17 rebounds which was offset by Kenyon Martin’s 16 points including the game winning layup with 29 seconds left in the game. After that it became a free throw war in which Billups hit 3 out of 4 to finish off the Lakers.

Looking back at that game, had it not been for the three point shooting of Kleiza the Lakers may have been able to hold on to home court advantage, but they ignored him leaving him open time and time again allowing him to finish with 16 points of his own. The big question was why didn’t Coach George Karl keep Kleiza in during the 4th quarter over JR Smith whose only basket came in the 1st quarter.

If nothing else Kleiza would have spread the defense, opening up some easier shots for Denver. Either was you can bet that Coach Karl will implement him more as they take game 3 back to Denver in hopes of taking over home court advantage by defending their floor at the Pepsi Center on Saturday night. Keep in mind L.A. will have there hands full in Denver where the Nuggets have won 16 straight home games.