The Lakers Are The 2009 World Champs 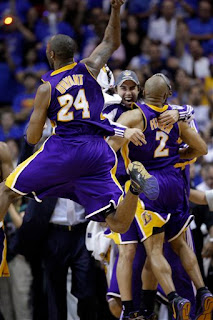 Game 5 picked up where game 4 left off, with Kobe on fire and Orlando spreading the ball around. In the first half you could sense another heavy weight battle between these two teams. Orlando came out and one the first period with points coming from 6 different players in the first half of the quarter. But with all the assists, and made shots from Orlando they only led by 2 at the end of the period thanks to Kobe Bryant’s 11 points.

During the second quarter the Lakers dug deep down within themselves and began to impose their will on the Magic. Lamar Odom came in hitting reverse layups and a big three pointer had 8 points in the half. Trevor Ariza had two three pointers to put the Lakers ahead and finished the half with 12 points. Mr. Bryant in the mean time put the icing on the cake with 4 more points a block and 4 assists. Down the stretch of the first half L.A. hit 8 straight shots, which aided in them turning a 9-point deficit into a 12-point lead.

The problem was the Magic team that we’ve seen hit three after three went cold during this series and things were no different in the first half for them only hitting 1 for 9 in the first half. Plus the turnovers from game 4 followed them into game 5 to the tune of 8, which also helped the Lakers in the scoring department.

In the second half L.A. did what real championship teams do, they had their foot on the throats of the Magic and never took it off. They kept the pressure on never taking any possessions off on defense or offense, never allowing Orlando back into the game. They knew Orlando would make a push at some point in time and they were right, because at one point Orlando closed the gap to within 5. That’s when Los Angeles commenced to really apply the heat, winning the title in game 5, 99-86.

Their defense was remarkable and their offense spoke for itself. Kobe finished with 30 points on his way to being named the finals MVP. Derek Fisher who came to the Lakers in 96 as a rookie along with Bryant had 13 points, Ariza finished with 15, and “The Candyman” Lamar Odom had 17 points and 10 rebounds. Pau Gasol who was a nightmare in the paint all series long finished with 14 points and 15 rebounds.

This Lakers team grew up after the loss to Boston last year and proved that they are and will be a force to be reckoned with for the next few years. If, and I’m sure they will, they can hold on to Odom and Ariza the west will be owned by L.A. no matter what off season moves are made by other teams. If anyone is to dethrone the Lakers it will have to be a team from the east congrats to the Lakers and all their loyal fans.