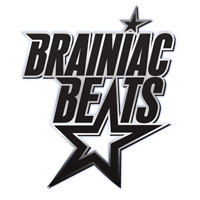 Brainiac Beats has not received any gifts yet

Brainiac Beats aka El Cerebro is a well known Spanish DJ/Producer now living in Brussels, with a wide range of experience producing for international artists. He started DJing for live shows in '97 and producing in '98, and since then he has released several albums not only as a solo producer but also with his crew Rhajha and with several other artists too. Brainiac Beats was signed for 4 years (2003-07) with a Spanish record label, where he released a 12" and a complete album.

He has produced more than 60 officially released tracks in different albums for some of the biggest Spanish artists plus 10 whole albums.

As a DJ he has toured all around Spain with his group Rhajha and, as a solo DJ, he has shared the stage with the likes of Wu Tang Clan, Nas, Redman, Guru, DITC, DJ Kool Herc, Xzibit, Ja Rule, Beenie Man, Common, Rahzel, Dj Craze, Dj Q Bert and the list goes on and on even representing Spain DJing in international events such as "WELCOME: MADRID!" in Sweden (2006).

Other experiences include multiple interviews in the biggest Spanish hip hop magazines and even the well known Metro newspaper with more than 400.000 copies distributed. He has also been interviewed on local TV channels, in regional newspapers and on national radio stations in Spain.

The internationally recognized energy drink brand Redbull has selected him several times as part of the panel of judges for Freestyle competitions and Producer's competitions in Spain.

All his previous experiences led Brainiac Beats to create his own independent hip hop label in 2007 called "Gris Materia", of which he is the CEO/Label Manager. The label has released 6 vinyls and several CDs up till now.  One of them is Brainiac Beats aka El Cerebro’s solo album as a producer, called "Simbiosis", which has been one of the most important Spanish hip hop albums to date, where every track is a battle between a Spanish and an international artist.  Artists featured in "Simbiosis" and other projects include Emilio Rojas, Afu-ra, Freestyle (ex-Arsonists), Cesar Comanche, Verbal Kent, Euphrates, D.Julien, El Gant, Oktober and etc... up to more than 30 artists.

In April of '09, Brainiac Beats' new release called "Grindin From Da Ghetto" (Remixtape) was launched and featured on some of the most important mixtape websites worldwide. In February 2011, Dj Woogie (Soulja Boy's DJ/SODMG) and Brainiac Beats just hit the US market hard with "The Lunchbox" (Remixes DVD).

Brainiac Beats aka El Cerebro is always working hard so keep your eyes and ears open because this producer is here to stay!