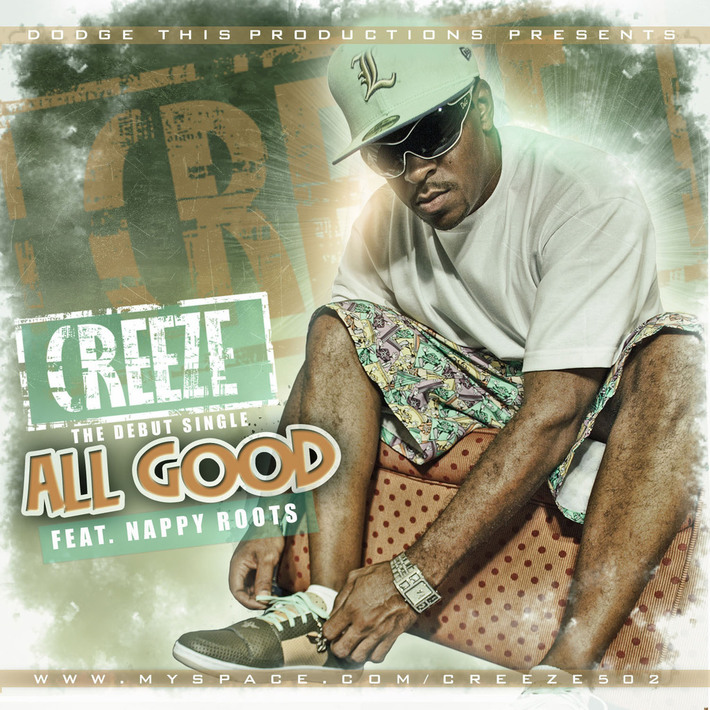 CREEZE has not received any gifts yet

Give CREEZE a Gift

Welcome to The Core DJ's Network! What is your Name? (PHOTO IS MANDATORY)
CREEZE "ALL GOOD"

What's Your Title/Business (What do you do?)
Dodge This Productions


When one thinks of Louisville, Kentucky, images of a booming Hip Hop community probably don’t come to mind. “Louisville is a smaller market so you have to go outside your box to get people familiar with you,” says resident rapper Creeze, who hopes to garner some major recognition for his hometown. “You need to have a vision and stick to it – when you do, everything else will come. When I get myself in the door, maybe people will look at me and think if I can do it, they can too.”

Brought up in the west end of Louisville, Creeze’s mother encouraged him to explore his musical options as well as a solid education. After learning to play the trumpet and saxophone, Creeze discovered he possessed lyrical abilities as well. Though he rapped his way through much of high school, it wasn’t until he enrolled in the University of Louisville that Creeze was driven to pursue his talent. “I didn’t graduate college,” he confesses, “But it was an important turning point for me. I didn’t want to do the school thing and I knew I could do something else in life that would help my family without having to go to college.”

That “something else” turned out to be rapping. Joining forces with other local emcees to form the super-group Merc Squad, Creeze become one of the last-men-standing as the group eventually dwindled down to four core members.

As one quarter of the rap collective, Creeze groomed himself for what he hoped would be a lucrative and lasting career. Releasing their first EP in 2000, followed by a second project in 2002, Merc Squad introduced themselves as permanent fixtures in their market. Though their first label situation with Dark Circle Entertainment didn’t pan out financially, it opened several doors for other opportunities liking touring. “We did a lot of shows between 2002 and 2005,” he recalls. “We performed in a lot of different cities – Nashville; Dallas; Charleston, WV; the Urban Network in Palm Springs, CA; and we did a lot of big car shows.”

So while the failed partnership with Dark Circle could have been disastrous for the group, it turned out to be a blessing in disguise. “After the Dark Circle situation, me and Tat [from the Merc Squad] decided to be more in control of what we had going on,” Creeze says, with enthusiasm. “We wanted to learn the game for ourselves, so we started our own company, had our own production and song writing, so we could keep everything in-house. That’s how Dodge This Productions came about.”

Soon media outlets took notice of Dodge This Productions’ roster, featuring them in publications like Murder Dog and OZONE Magazine, along with newspapers in the Louisville metro area. The attention helped put Merc Squad on the verge of breaking into the mainstream, but Creeze felt there was still much more to be accomplished.

Though not unsatisfied with Merc Squad’s efforts, Creeze had other objectives that weren’t being met within the group, so he recently decided to explore a solo career. He reveals, “The solo thang is really about me expressing myself, expressing things in my private life, and releasing some tension. I’m just trying to let Creeze come out.” While Merc Squad is still working on forthcoming plans, including several mixtape projects, Creeze is also focused on strengthening his personal portfolio.

In preparation for unveiling his debut album, The Louisville Lip, Creeze put together a rock-solid promotion blueprint and enlisted Nappy Roots for his first single. “All Good” is a positive reflection of Kentucky Hip Hop as a whole, highlighting both the state’s level of talent and Creeze’s own energy and lifelong passion for music. Innovative ideas for his first project, coupled with clear visions for the future, promise to showcase Creeze’s individuality and superior potential.