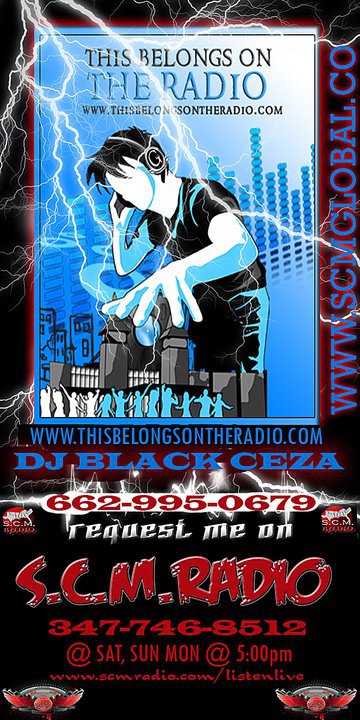 Djblack Ceza has not received any gifts yet

What is your PURPOSE for JOINING the CORE DJ RADIO NETWORK?
To Be The Hardest Working DJ In The World

What's Your Title/Business (What do you do?)
Black Ceza Records + S.C.M RADIO


PR Log (Press Release) – Dec 09, 2010 – DaLandLordOfDaSouth, the CEO and founder of Black Ceza Records & Middle Finger U Enterprises is a multifaceted monster, on the grind 22 hrs a day nonstop, to make it to the top of the music charts .

Djblack Ceza AKA DaLandLordOfDaSouth has made it his goal, to climb to the top with artists and producers from around the world, from rap and r&b to rock.Djblack Ceza- has a broad range of music styles and businesses, including Graphic Designers With DjTrey Cash, Website Design With Me33y, Recording, Music, Publishing co., Artist Management, Movies, Videos, and Radio are just a few to be named. Music and Entertainment has always been Djblack Ceza- best friend, a Cellphone, Pen and E Machine, have always been his women. In his career,Djblack Ceza- has had his run in with the law, on a number of occasions, from little crimes to major crimes, but now with God showing him a better way of life,Djblack Ceza- only crime has been killing the music world,with his knowledge, of running a super power house of artist and outstanding business. Quality Music i always on Djblack Ceza- mind and motivating the artist to become better is what he
pastors to his artist on a daily basis.Djblack Ceza- is recognized for his crazy style of drops for TV and radio, skits for mix tapes and Cds and his
wild mix down skills on the tracks. Artist, Promoter, CEO, Graphic Designer, Engineer, Artist Manager and so on and so on. S.C.M R A D I O.COM
-Request Line 662-995-0679
Office phone 662-321-7781

Djblack Ceza- A Letter, for the folks.. that want to make Rapping or singing there dream. Degrees are helpful, but they won't guarantee you success in the business world. Only faith in God and dedication to your vision can do that.See your vision and stick with it . I have learn to listen and not speak since I have had my 6 strokes yes i said SIX STROKES so I know why I am still alive? To show you guy's that with
some hard work and some bed rest you can achieve your goals.

The "ARTIST IN NEED" organization is a team of players that will change the way we Live. It's vision is about helping people that are less fortunate. We do for you what no one would,  we help folks out of jams. If your a person in need of anything? Call Djblack Ceza- or David Ford the CEO of the
outfit. I love being me, www.artistinneed.com go join today.
This Belongs On The Radio wwwthisbelongsontheradio.com is a network set up for A&R'S, Publishers, Recording Company's,Artist, Models, Club Owners and even Baby Sitters, all just at your finger tips. I am  the program directer for this site if you are an artist looking for music you can download your favorite track here on the site. Start of tomorrow we have a special going
on it's a $1.00 a day, 30 day's $30.00 dollars only until next year. In prizes will go up. So if you want to be seen and heard by BIG PEOPLE; JOIN TODAY. Don't wait til the prize's go!
www.thisbelongsontheradio.com


ARTIST MGMT/PUBLICIST  Michelle Alene this is my publicist..she has work in this field 15 years, she worked for Island/Def Jam Distribution as well as producer Toma out of Germany. She also worked for
Warner/Elektra/Atlantic doing artist tours and travel and promotions with artists such as Lil Cease, Brandy, Timbaland, Missy Elliott,Yolanda Adams,
Silk and many more.
www.bullzeyeentertainment.webs.com

I was just in Swaggnew Magazine Australian Hip-hop magazine. Anr Drekz is the CEO.
www.swaggnews.com I was featured in Southern Magazine Xsposure Magazine www.xsposure.com
The Daily Journal all the time CD Rated 10 which is great review
www.dailyjournal.com

Jaded Rzeign said…
Hello to all my Jaded Rzeign Fans & Supports.. The new Album Is near Completion. Get your Chance To listen and Get Free downloads Of our Music!!!!!!!
http://www.reverbnation.com/tunepak/2687656

Jaded Rzeign Is On the move this Month

We are at 1643 Plays On our You tube Single "Perfect"
http://www.youtube.com/watch?v=8-TO8vRQBYs&feature=player_embedded
Our Myspace Views had push to a Dinamic 504,780 with over 20 thousand spins
http://www.myspace.com/jadedrzeign

We have also Won The 2010 Best hiphop awards from One of the top Nings in the Business.
http://codagroovesent.ning.com/
Check out there Site It great for any inspiring artist looking for a Guide!!!!! holla at Coda grooves period..


If you Looking For Merch...... From the Rzeign
Go to our store Get what you Looking for. If you Dont See what You want Holla we make It just for you!!!!!!!!

LOS HAAS said…
hey whats good im a artist on the come up i was hoping if i can do some drops for you and send you my songs and link up.