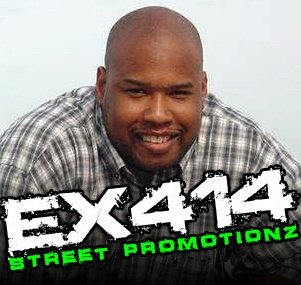 EX414 has not received any gifts yet

What is your PURPOSE for JOINING the CORE DJ RADIO NETWORK?
To promote my clients music for further radio play by the CORE!!!

What's Your Title/Business (What do you do?)
Promotionz

EX414 Street Promotionz, is headquartered in Milwaukee, Wisconsin was established by Eric Wyatt in 2003. With his ambition and love for the entertainment industry, he begun his adventure in being a street promoter for independent labels which lead to working for the majors in only a few months. EX414, main goal is uplifting the Wisconsin market and beyond throughout the Midwest by building up project awareness which would lead to in-store revenue and a strong fan base.

In the midst of claiming his throne as a street promoter, Eric Wyatt enrolled in a local technical college to pursue a degree in Visual Communication and Computer Graphics. As his skills were building as a Vicom Specialist, he incorporated that knowledge with his street marketing by being able to produce video, photography, web graphics and developing and managing his own website (EX414.BIZ) for EX414 Street Promotionz. While his promotional work and knowledge of the business were building, he was recruited by a independent record label “Double D’s Entertainment” for a nationwide campaign for a double CD release called “Before The Rise”. During his nationwide travel around the country and networking with everyone that he met, he gained promotional opportunities with WMG, SonyBMG, TVT Records and offered an independent sales rep position for CRUNK Energy. Never the less effective promotion is mandatory with EX414 Street Promotionz.