Welcome to The Core DJ's Network! What is your Name? (PHOTO IS MANDATORY)
HIP HOP ROOTS - EVERY TUESDAY - LAS VEGAS

What is your PURPOSE for JOINING the CORE DJ RADIO NETWORK?
Distribute Music to DJ's

What's Your Title/Business (What do you do?)
Fresh Talent Entertainment

Are you? (Check all that apply)
Music Artist, Promoter

How did you learn of The Core DJ's Network?
hip hop 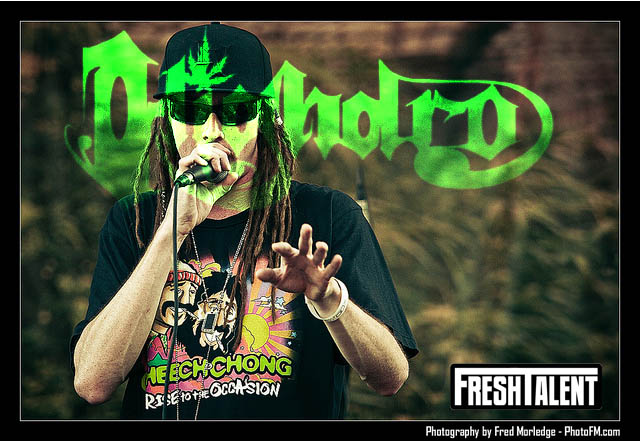 Highdro is a motivational force of positive energy exploding out of Las Vegas as one of the hardest working independent artists on the rise in hip hop right now. Highdro maintains his status as one of the most prominent young emcees on the west coast.His carefully crafted verbals techniques can be heard weekly in the city or touring frequently working exhaustingly to increase his fanbase. Highdro performs regularly in upto 3 bands ( Jagged Leaf Clover, Highdro with GDP and the newly formed RADIO:ALARM) along with his solo career as a MC and weekly host of Hip-Hop Roots Artist showcase in Las Vegas. All of his projects carry  their own unique sound that will take you on a different journey each time. So far Highdro has released 4 original albums in less than 2 years that have been well recieved by the local media. Within a week after forming a new band called Highdro with Goldfish Don’ t Bounce, they opened for the Wu-Tang Clan to a sold out crowd at the House of Blues Las Vegas.  Highdro continued to open for many top artists like the Slackers, the English Beat, Kotton Mouth Kings, Everlast, the Skatalites, Masta killa, Inspectah Deck, Killah Priest, Blueprint, Illogic, Abstract Rude, Aceyalone, Reel Big Fish, Tha Alkaholiks, LMNO, CappaDonna, Knockturnal, Free Moral Agents and many more. I want you to listen to my new song A Selfish Billionaire I know you will love it. Go on my website it will auto play. Spare change to Nicaragua or sponsor a Nicaraguan child by clicking here. http://www.worldvision.org/our-impact/country-profiles/nicaragua

Thanks for the connection!

thanks for the friend add and how are ya