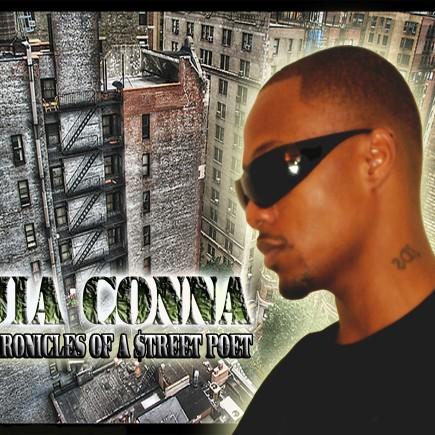 Jia Conna has not received any gifts yet

Chronicles of a $treet Poet

JIA CONNA was born and raised in Newark,NJ. Growing up on the mean streets of Newark, Jia witnessed many things that motivated him to want a better life. Influenced by hip hop greats such as Tupac, B.I.G., Jay-Z and Nas, young Jia began to write lyrics at the tender age of 14. Jia began by writing about the things happening around him until all that changed to actual experiences. Jia attended Vocational High School that boasts alumni such as famed television actress Tisha Campbell and J.D. Williams of HBO’s hit show The Wire. By the end of high school, Jia met three brothers from his neighborhood that used to hold free style sessions in their basement which resulted in the formation of the group L.I.F.E. That meeting went from the basement to studio sessions and live performances. As a way to pay for studio time and seeking the finer things in life the young men hit the streets where they became instant hoodstars but the streets have a way of institutionalizing hoodstars which became their fate. Then there was music.

With a swagger and a flow that’s relevant to the game, it was only a matter of time before Jia hooked up with the hottest new record label in the game, QwiLite Records, the brainchild of Grammy-award winning producer/composer, Quincy "Q" Patrick. Now, armed with his first single, "Rider Girl", and sheer grind for the music industry, Jia Conna is poised to be the heir to the throne of the rap kingdom.

Legendgary said…
WHAT UP FROM CALIFORNIA

strong enough ent. said…
when you get a chance send me your email addy so I can get my two new releases to you Jinx Da Juvy "I Want You" and Moe Money "Do The Model W alk" also we just released a movie on Koch Ent. called Cash Rules and will be droping another one called "Dont Blink" through Universal Feb/ March of 09. Finally look out for the new Grand Puba joint its Fyah this is what Hip Hop is mission. S.E.E what your missing.

Shad Skrillz said…
Wats good wit ya homie... Dis ya boy Shad Skrillz....Contact me when U or anyone at your label/company is looking for Original/Exclusive music for there next album, mixtape, Commercial etc....
We have alot of instrumentals waiting to be turned into hits....
I'm talking fire, so check out some of the Music/Beat mix's on my page, and let me know if your interested...