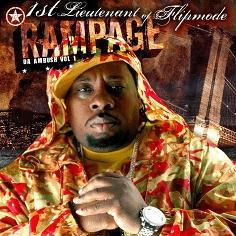 Rampage has not received any gifts yet

Give Rampage a Gift

Rampage, also known as Rampage the last Boy Scout is an American rapper who is a member of the Flipmode Squad. He was born as Roger McNair in 1974 in Brooklyn, New York City to Catherine Young and Roger Williams. He is the cousin of and long time collaborator with Busta Rhymes. In 1992 Rampage landed his first recording deal with Dallas Austin on Rowdy / Arista Records and released Beware of the Ram Sack. In 1994 he recorded Flava In Ya Ear (Remix) with Craig Mack, Notorious B.I.G., LL Cool J and Busta Rhymes. In 1996 he recorded the Platinum Single Woo-Hah!! with Busta Rhymes for the platinum album The Coming.

One year later he landed his second recording deal with Elektra Records and released his Gold solo LP Scouts Honor by Way of Blood. In 1998 he released the Gold LP Flipmode Vol. 1 with the Flipmode Squad, which gave them their first Source Award the next year in 1999. Since then he has recorded with Busta Rhymes on numerous platinum albums and has featured on numerous projects including a remix of the multi-platinum single "Fallin'" by Alicia Keys.

In 2002 FLIPMODE AQUAD made a huge impact around the whole world with 'I Know What You Want', the legendary love song with Mariah Carey and all the original Flipmodians, including Rampage of course (in the video, he's the cool guy in the yellow Lamborghini).

Currently based in Philadelphia, Rampage has recently landed an independent label deal for his own company mixing beats for his squad.

Although Rampage was not in attendance, during the BET's 2006 Music Awards, Rampage was in a prepared video in the background rapping a verse in sync with Busta Rhymes' performance of his single, Touch It (Remix).

AMBUSH TOUR “Deepfreeze Ent Presents” “The Ambush Tour 2.0” Featuring: Rampage, Rah Digga, DMX, Freeway, Beanie Siegel, Tash of the Alkaholiks, Spice 1, Leo Da Don and Jx3. This tour is scheduled to embark late / 2009. There will also be a host of new up and coming artist opening up and also some seasoned vets.

You never know who will be a special guest performer on the “Ambush Tour”.

Many artists have pledged to perform in designated cities. Although we are not allowed to reveal those artist names at this time stay Tuned! We will be announcing them very soon! If you are an investor, sponsor or Promoter and you want to be a part of this tour or if you would like to bring this tour to your city please contact: MARSHEA GREEN
PH: (602)-465-1927

For more Information on the Ambush Tour 2.0 please go to:
www.bringdatbeatback.com
&
www.myspace.com/theambushtour

What is your PURPOSE for JOINING the CORE DJ RADIO NETWORK?
To let everyone know about the ambush tour 2009

What's Your Title/Business (What do you do?)
Deepfreeze Ent.

DJ Julio Ex said…
what's up? love the music also keep the music coming, give me a holla maybe we can do some business together.

GOOD TO SEE UR ACTIVE SON. WAZ WONDERIN' WHERE U WAZ AT. SOON TO BE SLAMMING THRU THE DOORS OF TE INDUSTRY.