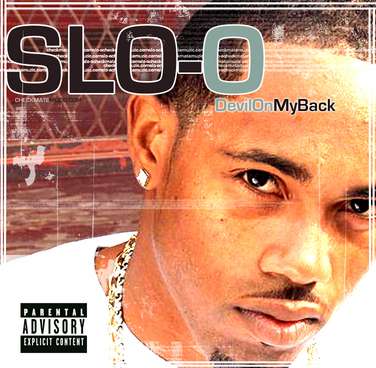 SLO-O Album On ITUNES Now~ Feats: Styles-P, Freeway, Jagged Edge!! Produced by Checkmate Muzik!! has not received any gifts yet

The streets of San Francisco better brace themselves for the latest sounds of Siege Record's recording artist SLO-O! With his newest album, Devil On My Back making it's way into the souls of every rap connoisseur on the worldwide tip, SLO-O is sure to knock 'em out!

A product of the streets, SLO-O has a branded heart of toughness, which holds dear the relationship with his grandma, who raised him since childhood. Originally from the Fillmore District in the San Francisco Bay, CA area, SLO-O grew up in the complexes Freedom West, or Def-Wes, as he refers to them. At an early age of six SLO-O started listening to rap and was influenced by the music of the streets. Whatever was played around him was what he took with him. "When you got people playing certain types of music around you of course that's the kind of music you grasp too", says SLO-O, in an interview. At age twelve he knew that he would become a rapper. In 2002, his dream became a reality after signing on with Siege Records.

While his first album, Game Over, was a statement of the experiences SLO-O had in his life, Devil On My Back represents the struggle SLO-O has trying to do positive with his music and life in general. Not having both parents to raise him was a realization to him how important it is to have influential parents in a child's life. He educated himself, and although it wasn't too hard being raised without parents, it was a fight to learn everything he needed to know on his own, not making the mistakes that would inevitably put him in a bad place in life. The lyrics SLO-O raps on Devil On My Back talk about the mental strains the streets put on a person, the tug-o-war going on with one's soul and the capacity to speak out the souls truth.

SLO-O, born Omar Flenoid, is trying to figure out the meaning of life and what he was put here for. Music has taught him that there is more to life that he wants to gain. Rap was a clue to him that there is hope if you work hard and make your vision clear, the same way the idea for his latest album came about. Devil On My Back represents the negative that is pulled from a choice to try to do positive. Each song on this album stands for a position that people in the streets hold true. "No Love" talks about the lack of love in the streets, the lack of care from people and the struggle to make it on your own. Another song, "Breathe", featuring D-Block artist Styles-P, talks about risking your life on the streets and trying, day to day, to survive by any means possible, while "Phone Call" reflects on how SLO-O planned a visit with his son to his mom in prison, talking about how the only way he can communicate with his mother is through the phone or by letters. It honors his mom being a soldier of spirit, doing 22 to life for her mistakes and eventually coming out of it a stronger, more spiritual person.

"This album you'll see the growth in my music, the improvement in my delivery, stronger story lines and better hooks", declares SLO-O, as he speaks about the difference between Devil On My Back and his first album Game Over. Although his story has been told over and over in the lyrics, SLO-O has matured his music from the music that is out there. "My music touches your soul. I speak the pain, the strain of the streets. But not only the streets, just life."

For more information on SLO-O or his touring schedule, visit the Checkmate Muzik website at www.myspace.com/checkmatemuzik

KaBoom Promotions said…
I'm promoting your music on my website. I need photos for the front page 1 or 2 photos will do. www.kaboom-promotions.com

Dj Starr Childd said…
Thanks for the add!! Happy New Year!! Get @ your Boy!!!

ZyeCha Inc. CEO/Founder PRINA said…
No problem happy holidays to you too.

What is your PURPOSE for JOINING the CORE DJ RADIO NETWORK?
Promotions for SF Bayarea artist Slo-O, Networking

What's Your Title/Business (What do you do?)
Ceo Siege Records / Music Producer /