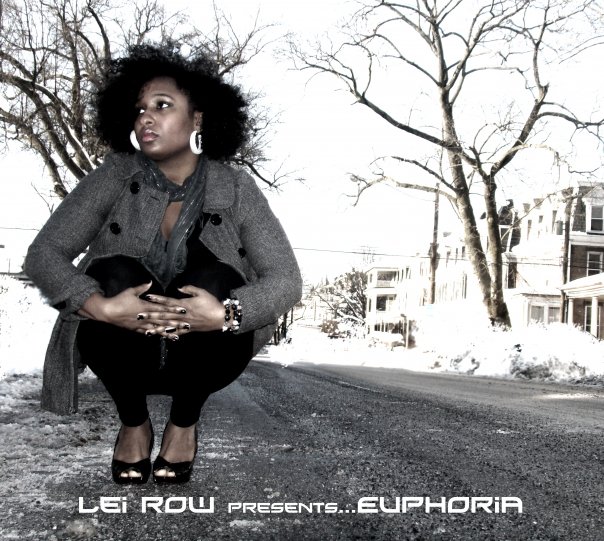 Lei Row has not received any gifts yet

What is your PURPOSE for JOINING the CORE DJ RADIO NETWORK?
To continue to network and build healthy and professional relationships in the music &amp; entertainment biz

What's Your Title/Business (What do you do?)
Singer/Songwriter/Vocal Producer and getting into theatre & acting more :-)

Known for her unique melodic vocals, heartfelt lyrics, and chic vintage style: Lei Row brings an urban yet retro flavor and sound to music. Some say it's new and some say it's reminiscent; but most say it's necessary. Lei Row: "The Urban-Retro Songstress" is definitely making her mark in music and entertainment and you want to hear what’s been missing, then Lei Row is your girl!

Lei Row is an independent singer/songwriter/vocal producer originally from Harrisburg, PA and she has a familiar story on how she got started. She’s been singing since she was a little girl and her main foundation and influences come from growing up in the church. During her teenage years, Lei Row was a part of an R&B girl group called “Untitled” who were the protege group of a then popular R&B male group “TreSan.” Through this experience, (especially under the influence and mentorship of former member now reputable singer/songrwiter/producer/musician James “Jim Beanz” Washington), Lei Row was introduced to the arts of song-writing and vocal production and hasn’t stopped since!

Through the years, Lei Row has performed and sang back-up in different concerts, musical plays, weddings, and talent showcases. Back in 2006, Lei Row would perform in the Wednesday Night showcases at the renowned Philadelphia Old City music and dance club “Five Spot.” Lei Row and the live house band rocked out together, keeping the crowd moving! Inspired by consistent positive feedback and reviews from audience members, Lei Row realized that it was time to take all of her musical talents to an even higher level. Since then, she has worked with several artists, writers, and producers in New York City, France, Miami, the DC-Maryland-Virginia area, Harrisburg, Lancaster, and Philadelphia: writing, singing, producing, and performing.

Lei Row has been an opening act and HEADLINER at the legendary "Sugar Bar":  a famous lounge bar and restaurant in New York City owned by renowned songwriting and performing duo Nicholas Ashford and Valerie Simpson a.k.a. "Ashford & Simpson."  The Sugar Bar has been a hot spot for legends such as Stevie Wonder, Dr. Maya Angelou, Whoopi Goldberg, Berry Gordy, Stephanie Mills, Eddie Murphy, just to name a few.

Lei Row was the "featured" musical soloist for the 2010 "Ebony Sisterspeak Luncheon."  This is an annual event hosted and sponsored by Ebony Magazine, Pine Sol, and the Powerful Difference Campaign that celebrates the unique sisterhood of African-American women and promotes a spirit of community, and honors women for their outstanding efforts and accomplishments in their communities.

Lei Row was finalist in the "Andre Harrell Superstar Soul Search" of Philadelphia, PA.  She placed in the "TOP 10" in which she came in at #7 and her single "In Love Again" had over 2000 spins during the month of June (2010) on OurStage.com in the contest as well.

Her single “In Love Again (The Things You Do)” was featured on NYC’s HOT 97 “Twitter Unsigned Tuesday” hosted by J. Medina and “The Star & Bucwild Journey” on VladTV and Shovio.com. She was also awarded a Silver Auddy Award through uPlaya Music Universe. Lei Row was a finalist in the Melanie Fiona & Loud.com singer-remix contest where contestants had to write and demo an original piece to Ms. Fiona’s (song) “It Kills Me” instrumental. Lei Row has also been recognized as a talented up-and-coming singer/song-writer by “Suavv Magazine”, “REAL Ent,” “Vigoronline: Urban Music & Culture,” and “Sound-Savvy: The Community for True Fans of Real Music.” She was also the November 2009 “Artist of the Month” on urban media info station “Nonstopinfo.com” and her album was featured on “S.B.N.P.” by music & entertainment journalist Chan Lo.

Lei Row would like to continue to collaborate with other singers, writers, producers, rappers, and poets for future projects.

Although R&B, Gospel, and Pop are her musical backbones, she is versatile and does not confine her taste or projects to one genre…hip-hop, jazz, rock, country, classical, opera, reggae, latin, electronic: she studies, loves, embraces, and incorporates it all. Thanks for stopping by and learning a little more about Lei Row.

IT'S NOT A MUSIC VIDEO! The Word Eye Heard is this week's entertainment news, with my comedic twist:

lilD said…
Here's the latest installment of the Word Eye Heard, this week's entertainment news, with my comedic twist:

lilD said…
Thank you! I do them every Sunday. Check out the fb page to keep up with them! http://www.facebook.com/TheWordEyeHeard

Passion Mae said…
Hey girl! Thanks for becoming a friend.. Im really loving your song "Fill in the blanks" thats REAL! Keep pushing thos GREAT songs.. You are very talented.. I will def be checkin in on the regular to listen to your music. {Passion}

lilD said…
I love ur song "Fill in the Blanks!"

Passion Mae said…
Girl you have an AMAZING voice.. Keep it up! Passion out of Lexington KY is def. a FAN! lilD said…
The Word Eye Heard, a recap of the week's entertainment news, with lilD's comedic twist of course: http://ning.it/gj72sx