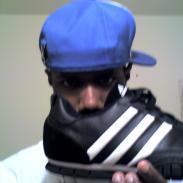 ★Prince Kangaroo★ has not received any gifts yet

Welcome to The Core DJ's Network! What is your Name? (PHOTO IS MANDATORY)
Yup

What is your PURPOSE for JOINING the CORE DJ RADIO NETWORK?
Im Tryin To Get A DJ For My Shows

What's Your Title/Business (What do you do?)
I'm Music Artist

★Kangaroo On Deck A.K.A. Prince Kangaroo★

Hit me up on my iPhone
princekangaroo@gmail.com send ya pictures and fan mail

He's A Solider man Its Like watching a young Soulja Boy Tell 'Em On A high level with his music.He was born In Milwaukee,WI but moved to Memphis,TN When He was (Three years old) but came back to Milwaukee in 2002.Ever since then He has been taking The World By Storm One day at a time.He Left the Hip-Hop World when he was 8 Years old And returned At 13 years old.He made A Mixtape With his cousin Nic Stokes Called Fame & Fortune.He Sold Over 100 Ringtones Off Two Songs on the album Snap Or Die And Special Girl.He's the Creator/C.E.O. of H.O.D. Money Click And H.O.D. Music Ent. Along With Nic Stokes.Da Prince Has had A song ranked 46 in The Whole Country Out Of 1 Million Songs For 8 Weeks In A Row!!! His Fans call him "Da Prince Of Tha Internet".His Agent And Close Friend Jordan Pope Makes Everything happen for him when It Comes to His Music.His Wonderful Mother Yolanda Makes everything else in life happen for him. Soulja Boy Tell 'Em Is His Idol.He Inspires him to write music and make it to be a hit to his people all around the world. So That's it about Da Prince.All of his fans keep supporting him and stay on his side.Buy all his albums Please!!! Peace!!!
H.O.D. Music 4 Life