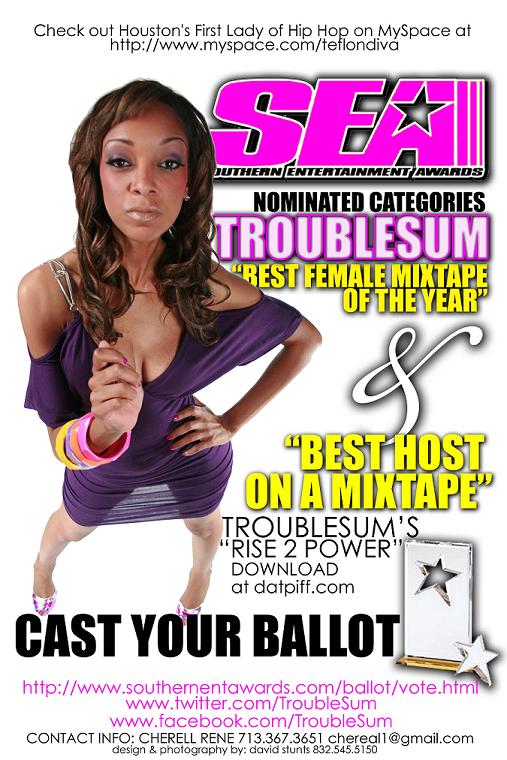 Houston, TX - Houston’s 1st Lady of Hip Hop, TroubleSum, has been nominated for two Southern Entertainment Awards (SEAs), in this seventh installment of the annual ceremony. The SEAs, which highlight the accomplishments of those contributing to the growth of southern music and culture, will take place on March 7, 2010 in Memphis, TN.

TroubleSum, currently riding the wave of success from her latest mixtape project Rise 2 Power, is nominated for both Female Mixtape Artist of the Year and Best Mixtape Host (where she is the only female in contention for the award). The highly touted project features collaborations with hip hop heavyweights Trae Tha Truth, Corey Mo, and Lil Ke Ke. This Houston native and fixture on the music scene is no stranger to such recognition, but was still humbled by the honor, "I give each project I’m blessed to be apart my all, and to be recognized with these nominations for my hard work are awards within itself," she explains. To her credit, Troublesum is one in a handful of female MCs to be consistently acknowledged on a national scale, having already been awarded the title of Best Female Rapper in Houston by The Houston Press, featured on Rap City’s Spit Yo Game, and in AllHipHop’s coveted Breeding Ground.

For More Information about Houston’s Own TroubleSum Nominated for Twice for the 7th Annual Southern Entertainment Awards and/or Interview Requests please contact Publicity Pieces via the above contact.

-Check out Houston's First Lady of Hip Hop on MySpace at http://www.myspace.com/teflondiva