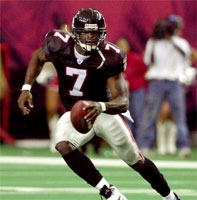 Something is seriously wrong with our country’s values when a man gets caught dog fighting, and lying about it, then serves time in prison and still goes unforgiven by many.
I’ll never defend what Michael Vick did, but I do believe in second chances. The man served his time and will probably be suspended for the NFL for a year once he is released from prison.

With all that, some people still want to see him in prison for life and banned from the NFL. Apparently fighting dogs is a crime that is on the same level as murder, kidnapping, rape, and terrorist attacks. Unforgivable.

Thank God the death penalty wasn’t an option, because if it were left up to certain people the man would’ve surely been put to death. What more does he have to do in the eyes of society in order to move on with his life?

He learned a very valuable lesson in all this, and that was no mater how rich and famous he is he’s not above the law. Hopefully he learned that he is a professional and in being such you have to act like it. I’m not saying forget where you came from, but you do have to sever certain ties and make some changes.

But we’ll never know if he’s grown from this experience until he’s given that second chance. He’s already had a lot taken from him including his freedom; he’s paid his debt to society. Once he’s served his NFL suspension it will be time for people to move on and put this behind them.

In closing I wish him nothing but the best. If he can get back to his playing form and has success it will be a true testimony, and a true comeback story. If he can’t get back to what he once was, then hopefully younger athletes will look at Vick’s story as an example of how everything can be taken away from you when you make bad decisions.