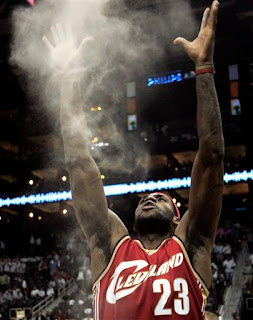 So sad so sad, I know I’m a week late talking about this, but I still have to give you my two cents on LeBron James. Last week reports surfaced that during his basketball camp, which was hosted by Nike, King James was the victim of poster-i-zation. Apparently James was dunked on by Jordan Crawford, and soon after the incident took place Nike confiscated all videotapes that may have recorded the footage. Reports were even saying that James was seen talking to the Nike reps right after the incident, which many have speculated as the time when James told Nike to confiscate the tapes.

First off rather it was James’s decision or not this is an example of how Hollywood the world of entertainment really is. It’s always been known that whoever has the dollar dollar bill ya’ll, rules. This seems like an incident that would only take place in a movie or on a television show. The story could have been regular guy dunks on NBA superstar, but the superstar disposes of the proof so no one ever really knows.