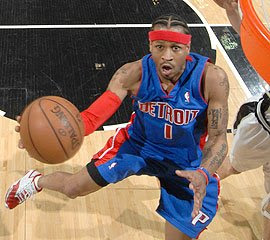 We’re getting closer and closer to finally knowing where Allen Iverson will land. In the beginning everyone figured he wouldn’t be moved until after the season started, but now it looks as if things could be sorted out before the tip off of the upcoming season. The four suitors are the Memphis Grizzlies, the Charlotte Bobcats, the Miami Heat, and now the Los Angeles Clippers.

As A Tribe Called Quest once said let’s check out the scenario, well at least a few of them starting with the Grizzlies. Memphis already has Mike Conley Jr. and OJ Mayo rotating the point guard position. When Mayo’s not running the point he’s at the shooting guard position, meaning there’s really no place in the starting lineup for Iverson unless the Grizzlies want to take a step back by placing Conley on the bench.