Kobe and the Lakers Try For A 1st Round Knockout 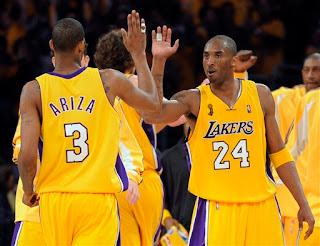 Howard only scored 12 points off of 1 field goal. Translation he only scored 1 basket the rest of his points came from the free throw line. But Howard wasn’t the only one contained, as the entire Magic team only had one player hit more than 3 field goals and that was Mickael Pietrus who hit 5 field goals scoring 14 points.

Orlando was able to get to the basket, and to get open shots they just couldn’t get the shots to fall. Part of it was the Lakers defense and part of it was Orlando missing shots. It’s like I’ve been saying through out Orlando’s run if you live by the three you die by the three and last night they died a long slow death.

The only bright spot for the Magic was the return of their all-star point guard Jameer Nelson who had 6 points and 4 assist. His numbers weren’t huge but his pay was mighty impressive for a guy that hasn’t played in 4 months.

Props definitely go out to the Lakers for the way they performed too. Kobe released the “Black Mamba” scoring 40 points and just coming up 2 rebounds and 2 assists short of a triple double. Pau Gasol had 16 points accompanied by 8 redounds. But the x factor for the Lakers was once again Lamar Odom who had 11 points and 14 rebounds.

The Lakers won game 1 convincingly to the tune of 100-75, but remember it was just game 1. Expect better coaching from Stan Van Gundy, and better shooting from the Magic. I can’t guarantee he’ll figure out how to get Howard the ball in places that he can score from, or that he’ll devise a way to slow down Kobe, but he will have Orlando back to form.

Phil Jackson showed why he’s a hall of fame coach, by forcing Van Gundy to change his whole game plan. He was calling timeouts left and right testing different lineups and ultimately it cost him game 1, expect him to stick to what got him and the Magic to the finals for the rest of the series. Round 1 is done, strap on your seat belts because the rest of this series is going to be one wild roller coaster ride.