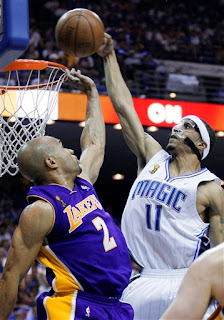 Orlando did what everyone expected them to do, and that was winning their first game at home. The question is can they make it a series and win the second game, and then make it real interesting by winning their third home game as well? If I know Stan Van Gundy he has his team taking it one game at a time, and that means they’re only concerned with Thursday night’s game.

Last night the Magic displayed a record setting 75 percent shooting performance in the first half on their way to a 108-105 win over the Lakers. They finished the game shooting nearly 63 percent from the field, lead by a break out performance from Dwight Howard who finished the game with 21 points and 14 rebounds.

When a team shoots at a percentage that high though, you know it had to be more than one guy shooting well, and it was. Rashard Lewis who has been Mr. Consistent throughout the playoffs went 8-14 from the field hitting 3 out 6 three pointers on his way to a 21 point night.

Hedo Turkoglu turned into that guy that cause Boston and Cleveland so much heart ache by hitting 7-12 and 1 major three pointer finishing with 18 points. And coach Van Gundy finally decided to stick with what got his team to the finals and that’s consistent minutes for Rafer Alston. Alston finished with the team’s third highest point total with 20, setting the tone for the Magic.

For Orlando their x factor finally showed up, and we’re talking about the 18 points put up by Mickael Pietrus. He didn’t hit any three’s but still managed to hit 7 out of 11 including what many called the play of the night during the last couple of minutes in the fourth quarter.

While Kobe Bryant guarded Pietrus on the left corner Turkoglu decided to drive to the basket, which caused Kobe to go help on the double team. Turkoglu missed the pull up jumper, but Pietrus swooped in catching the ball off the rim and dunked it back in.

That wasn’t the only big play that involved Kobe who finished with 31 points, specifically his drive to the basket where he ran into the NBA’s defensive player of the year Dwight Howard. While Bryant drove to the right side of the basket in hopes of a layup Howard had a standing two-hand block, which was called a foul in the last minute of the game.

Bryant ended up missing one of his free throws, which Orlando capitalized on. On Orlando’s next possession they missed a shot but got back on defense where Howard and Pietrus forced Bryant to lose the ball while trying to drive from the top of the key. Pietrus fouled by Bryant went down to hit his free throws and pretty much sealed the game.

It’s believed that in this particular game Bryant tried to do too much not trusting his teammates. It looked to me like he was just doing what he did in game 1, and that’s set the tone. In the first half he was like the video game version of Kobe Bryant hitting everything from everywhere, and was the only reason L.A. was even in the game.

In the second half he only had 10 points and missed some very important free throws. The experts say he should have passed more, but honestly if he had stayed hot in the second half no one would have complained. In game 1 he did the same thing.

He was trying to send a message saying “I’m putting my team on my back and taking this game away from the Magic.” Unfortunately he just didn’t hit every shot like he did in game 1. And as far as looking for his teammates he once again had 8 assists.

The biggest reason for the loss last night was the Lakers defense and the unbelievable shooting from the magic. Game 4 promises to be another scorcher where we’ll see what kind of adjustments Coach Phil Jackson makes for the Lakers.