Urbansoundva is now a member of CoreDJRadio
16 hours ago
Welcome Them! 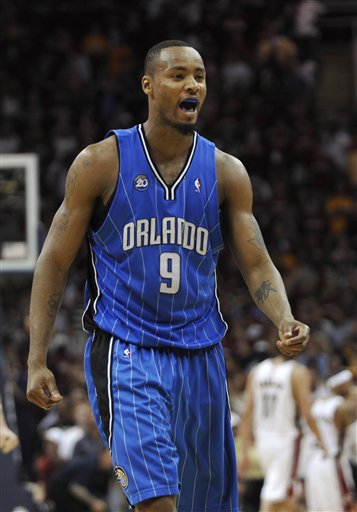 It was all about the supporting cast in game 1 of the eastern conference finals. In years past we’ve all been witnesses to Lebron James willing his team to victory, but against a multitalented Orlando Magic team it was doubtful that James could do it alone, and in game 1 it showed.
The Cavs running on adrenaline got out to a 33-19 lead in the first quarter and managed to sustain their energy through the second quarter, going in at half time with a 15 point lead. The old cliché is, that’s why they play for 48 minutes.

In the third quarter Orlando came with a relentless attack spreading the Cavalier defense out, opening up three point shot opportunities one after another. The reason this was so affective was all the attention Cleveland had to give to Dwight Howard who scored 30 points and snatched down 13 rebounds.

Each time the Cavs would leave an extra man in the paint watching for Howard, it would allow Orlando to place an open shooter in the corners to knock down threes or deep twos. The result, Orlando took the lead in the third quarter forcing Cleveland to have to chase them from behind for the rest of the night.

Normally this is a feat that Cleveland overcomes, except for one small problem; Lebron was forced to almost do it by himself with no production from the bench. In the beginning of most fourth quarters Coach Mike Brown likes to rest James, but with less than two minutes into the fourth quarter he was forced to call a timeout in order to get James back in the game.

Orlando’s bench outscored Cleveland’s 25-5, and even though James put up 49 points it just wasn’t enough to give the Cavs the game 1 victory. The entire Cavs team outside of Lebron went cold in the 3rd quarter, but managed to warm back up in the 4th quarter. However by then it was too little too late, because the Magic neglected to cool off.

Each team hit big shot after big shot, but in the end it was a three pointer by Rashard Lewis, who scored 22 on the night, that sealed the deal and gave Orlando the 107-106 victory stealing home court advantage from Cleveland.

If the Cavs hope to make it to the finals then Lebron’s supporting cast will have to step up and deliver, and Coach Brown will have to come up with a better scheme to defend against Orlando’s three-point attack. Simple mathematics says that 2 is less than 3; so maybe allowing Dwight to get a few dunks isn’t as bad as allowing Lewis and Hedo Turkoglu, who scored 15 points while adding 14 assists, to bomb on them from the three point line all night.