Pro Athletes No longer Receiving Passes for Their Actions 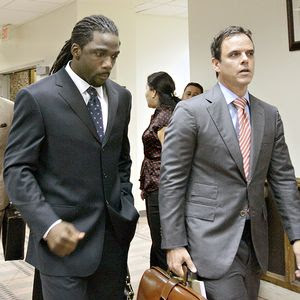 It’s nice to know that more teams are starting to care about their player’s character on and off the field, or court. Maybe it’s just the opinion of this blogger but I see things getting a lot better. It wasn’t long ago when athletes were getting in trouble on the regular and only getting a slap on the wrist, now they’re like children learning that there are consequences to their actions.

The Portland Trailblazers cleaned up their team’s image by basically getting rid of the entire team. Their owners decided that their players were not above being punished or cut for their actions. From their star player Rasheed Wallace to their youngest star Sebastian Telfair.

In Minnesota the Vikings cut or traded everyone away for the alleged “Viking Ship” incident that involved alleged strippers and call girls. The organization knew that by getting rid of the players involved, that their team would struggle in the following seasons to come. They decided that some things were more important than winning football games.

The Cincinnati Bengals did the same thing after experiencing years and years of their players getting in trouble off the field. They decided enough was enough and started shipping out the trouble makers all the while knowing that their win percentage would take a dip.

It had to be difficult for that organization considering they had been one of the worst football teams for many back-to-back seasons. The year that they finally made it back to the playoffs, many people figured they would be a team to reckon with for many years to come. Like the two previous teams mentioned, they too decided that some things were more important than winning records.

This offseason we’ve seen four players cut from their teams due to off the field issues. Plaxico Burress of the New York Giants, for his gun charges stemming from a nightclub incident in 2008. Michael Vick was released by the Falcons this week due to his dog fighting charges, and Donte’ Stallworth was released by the Browns for his DUI manslaughter charge. Oh, and let’s not forget Pacman Jones was released by the Cowboys, but according to their office it was because of his underachieving performance.

There was a time when the only thing that mattered to teams was winning, it’s nice to know that some teams are taking the stance of “If you screw up you can be replaced by someone who won’t”. Personally I don’t think players who continue to get in trouble should continue to be rewarded.

Playing sports professionally is a job, and part of that job description is to be a model citizen. When other people fail miserably at fulfilling their job descriptions they have to suffer the consequences, and now so do professional athletes thanks to the responsible team owners who won’t tolerate their “I’m above the law” attitudes.

Permalink Reply by PAM GREER on June 17, 2009 at 4:43pm
I love it! I am so glad that this new "Zero Tolerance" attitude is being enforced. Now PR reps must really use their brains to get attention for their clients. The actions of people like Plaxico to Fred Smoot plus others makes our striving black community look bad. Secondly, it create the wrong image to the youth that watch these guys...next crack down on the artists. Peace!