The Contestants For The Finals Are Decided 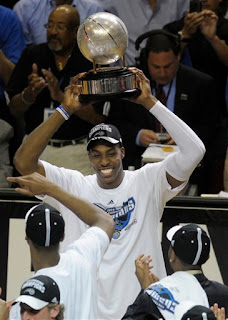 The Finals table has been set with the expected favorite out of the western conference the Los Angeles Lakers taking on the surprise Orlando Magic. I say favorite because most experts picked the Lakers to win the west, but very few expected the Magic to come out the west.

Friday night the Denver Nuggets played as if it were the first game of the season. There was no crispness to their offense; their defense seemed to had lost its normal physicality that they worked all season to develop. The Nuggets basically looked like a team that froze on the big stage.

That’s the wrong way to step into an elimination game against the Los Angeles Lakers, especially when Kobe Bryant is playing like the assassin known as the Black Mamba. Bryant had 35 points, 10 assists, and 6 rebounds in the game 6 win over Denver.

Lamar Odom’s play from game 5 carried over into game 6. This time the kid from Jamaica Queens had 20 points and 8 rebounds off the bench. Pau Gasol had 20 points, 12 rebounds, and 6 assists. Luke Walton had 10 points and Trevor Ariza had 17 points. With those kinds of numbers it was no surprise the L.A. won 119-92.

On the east coast it was the same story it had been all series for Cleveland and Orlando. Coach Mike Brown continued to prove that he was a fluke as coach of the year with his bad defensive schemes that had not worked in the first 5 games.

Once again each time Orlando had the ball there was always a man open in the corners. Rashard Lewis & Hedo Turkoglu of all people were the guys that kept finding themselves open. After 5 games you would think that those would be the last two guys left open, but Coach Brown didn’t quite figure that out.

Not only did Cleveland allow the Magic to go crazy from the outside again, but also they couldn’t stop Dwight Howard from putting up some playoff historic numbers to the tune of 40 points, 14 rebounds, and 4 assist.

LeBron James got help on offense this time with Delonte West scoring 22 points; Delonte West had 17, and Anderson Varejao scoring 14. The problem offensively for the Cavs was zero help from the bench.

The Cleveland bench was outscored by Pietrus 14-10 in the Magic’s 103 -90 win on Saturday night. This was much like game 3 when he outscored Cleveland’s bench 17-14.

The crazy thing was that aside from Orlando upsetting the Cavs, was how upset LeBron was following the loss as he left the court without shaking hands, and without talking to the media. Some say bad sportsmanship, James disagrees. In an open media Q&A in Cleveland James said “Somebody beat up you not going to congratulate them for beating you up.”

My response is tell that to Mike Tyson, who was cheated by the refs, when he lost to Buster Douglas and to Muhammad Ali who lost to his rival Joe Frasier. They both met their opponents in the center of the ring and shook hands after they lost.

I understand losing is frustrating, especially when you’re picked to be the champions, but it just shows good sportsmanship. As adults when we see kids act like that we, we preach to them about being good winners and good losers, the rules shouldn’t change when kids grow into adults.