Permalink Reply by DJ KTONE THE TURF DJ on January 16, 2009 at 10:58am
you didnt have colorado in your email, but im taking it upon myself to shoot you this music... both artist's have albums out thru C-BO'S WEST COAST MAFIA/ KOCH DISTRIBUTION.

C-Styles also known as C-steezee is originally from Bremerton, WA and now resides in Beckley, West Virginia. C-styles started break dancing back in 84’ when he was 4 years old. Since then he has evolved his lyrical skills to dominate the hills of West Virginia. C-Styles has been called upon to open up for such acts as the Ying Yang Twins, L.L. cool j, Mr. cheeks, Capadona, and more. He has performed in West Virginia, Virginias, North Carolina, Atlanta, Miami, Seattle, and New York. Working with popular DJ's and collaborating with various artists, C-styles has enhanced numerous mix tapes, albums and DVD's. Known for his charisma, lyrical genius and overall motivation, C-styles live performance is second to none. C-styles rocks the house with his live solo performance, and also generates energy for The Warheadz, Nauseous, and Killa-B. His main focus is bringing his perspective of life to the masses in a uniquely packaged lyrical format. C-styles is highly motivated to build his musical career and invest his time networking with independent and major labels and collaborating with artist. Making moves on the daily he is definitely all star material.

Permalink Reply by A DOT K on January 19, 2009 at 12:28pm
a dot k is next 2 blow!!! download new street smash hit from caliuntouchables.com ft.glasses malone

Permalink Reply by CHRIS THE HITMAN on January 19, 2009 at 4:48pm
I LOVE THIS SHIT CALL ME OR EMAIL ME SO WE CAN TALK NATIONAL PROMO AND A FEW OTHER THINGS MY NAME IS CIRIS THOMAS I WORK FOR GARY KATZ AND SPINDOCTORS PROMO GROUP.I CAN BE REACHED AT 646 228 5793 OR EMAIL.....SPINDOCTORCHRIS@GMAIL.COM..LOOKING FOWARD TO WPRKING WITH YOUR TEAM! 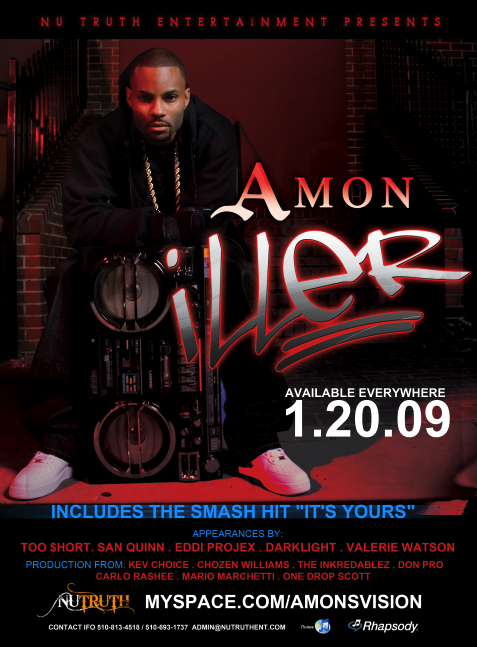 My nigga AMON tha iLLEST on tha West Coast his debut album "ILLER " In stores & online 1.20.09 History will be made by more then 1 man, Tha SMASH HIT "IT'S YOURS" is #6 on tha EUROPE'S URBAN Dj CHART
CONTACT: admin@nutruthent.com for info or IT'S YOURS_ BLAST

Permalink Reply by Mr Bombay on January 21, 2009 at 12:37am
Bazial from East Oakland Ca, the realest ballers in the West. Holla at us, we are making serious moves, doing big shows and taking the streets in 2009.

www.bazialinimusicgroup.com - Go Get It! (MP3 Attached)