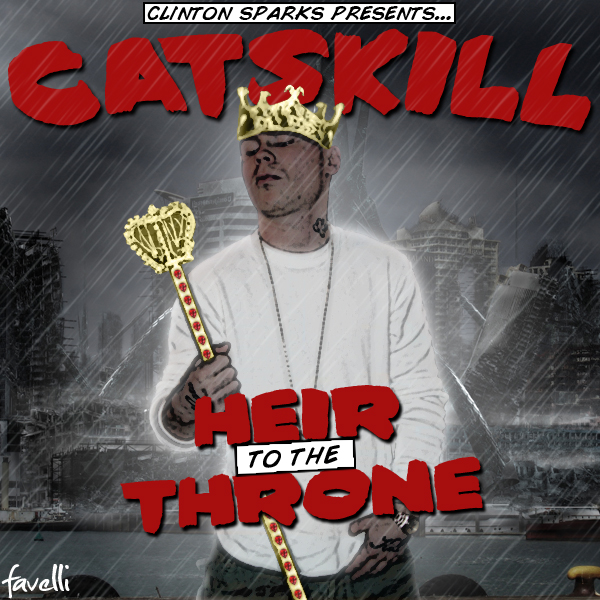 CATSKILL has not received any gifts yet

Give CATSKILL a Gift

What is your PURPOSE for JOINING the CORE DJ RADIO NETWORK?
i want to let the dj's know what dope sounds like

What's Your Title/Business (What do you do?)
i am here to let the world know i exist. lets network!!

DJ CLINTON SPARKS PRESENTS CATSKILL ''HEIR TO THE THRONE''
IS THE GREATEST HIP HOP ALBUM OF ALL TIME!!!

FIND OUT WHY THE BIGGEST DJ IN THE WORLD GOT BEHIND THIS PROJECT.

ARE YOU AS EXCITED AS I AM? WELL YOU SHOULD BE!

SPREAD THE WORD. LEAVE FEEDBACK. LET THE WORLD KNOW YOU LISTEN TO CATSKILL!!

LISTEN TO THE WHOLE ALBUM NOW.... CLICK MUSIC ON THIS WIDGET.


New album on the way from Catskill Los Angeles, CA – “Good to Go” is the new single heralding the upcoming release of hip-hop artist Catskill’s album “Heir to the Throne.” “Good to Go” has the name it has because it’s exactly that – it’s ready made delight for your ears. With Catskill’s wicked sense of humor, cutting edge word flow, uncanny knack for hooky melodies and whipcrack beats, “Good to Go” is an atomic bomb of talent, radioactive with originality. Catskill is skilled; his hip-hop mimics none, repeats nobody. “Good to Go” starts from scratch, building only on the artist’s uniqueness and singular mode of self-expression. “Good to Go” demonstrates right from the first 30 seconds that Catskill is the new evolution of hip-hop. His strengths all shine forth on the song – the secret of his strengths is that he has no weaknesses. Every element is in place. It was by sheer chance that Catskill became a recording artist. He entered a freestyle battle on a hip-hop radio station, and after laying waste to the competition, he set out to prove that he could make rap like no other artist in the genre. Catskill spent three years crafting an album that could do for hip-hop what “Thriller” did for pop music – though with tons more attitude. “I tapped into my dark side with songs like ‘Die’,” says Catskill. “I wanted to create music that hasn’t been created before. And I went in for the taboo.” Catskill’s dark side takes many forms – even the humorous. “Sugar Town” is a feisty song with astounding flow, jaw-dropping rhyme schemes and word constructs – and it’s about whipping a handicapped girl into shape for the Special Olympics. “My music is meant to be controversial; it’s meant to be talked about, to be studied,” he exclaims. Catskill’s distinctive style earned him the attention of Clinton Sparks and Smashtime Radio. He has been a featured artist on East Coast Digital Radio and appeared on the morning show on Shade 45. Catskill also was featured in www.dubcnn.com’s world exclusive Unsigned Hype interview. In addition, he has recorded two tracks for the upcoming “Aftermath” mixtape. He also signed a ringtone deal with Vio Mobile. Two of the songs on the new album feature notable collaborations. “I Love That” boasts an appearance by Moka Only and “Fe Fi Fo Fum” benefits from the talents of Bizarre from D12. Catskill is currently at the center of a bidding war of sorts as various industry interests vie for his signature on a contract. He is holding out for the right label to unleash the unorthodox, hit-making style of “Heir to the Throne,” his full-length debut. Watch www.myspace.com/catskillmc for details as they emerge. He is currently working with A&R Select, the premier A&R firm based out of Los Angeles, CA. More information is available by visiting www.arselect.com. PURCHASE MY MUSIC SO I CAN FEED MY LADY. THANK YOU!! Be sure to SHOW STALLION MODELS SOME LOVE...... Our website is www.stallionmodelsinc.com . If you would like to work with any of the Stallion mOdels then please be sure to drop us a message on the BOOK a STALLION link on the website. Much love and Success to you.

Dj Commando said…
stepincommand@gmail.com for mp3s all day. Clinton is my man 100 Grand! Send me your joints

Passing Through Your Page, Showing That Mega City Love .. Just Thought I Would Swing Through And Check Up On Ya, See How You Doing .. Pass By My Spot And Holla At Me Sometime .. And Don't Forget To Check Me Out At