HERON has not received any gifts yet

What's Your Title/Business (What do you do?)
dj producer

DON V.A.'s NEW SONG PRODUCED BY HERON & KANE
THIS JAM IS THE HOTTEST YOU CANT GO WRONG THIS IS GOING TO BLOW UP IF YOU NEED DROPS EMAIL ME @heronaddiction@gmail.com 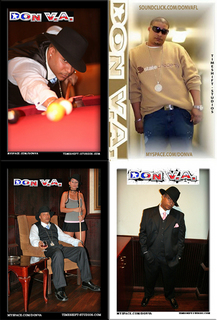 Fastmoney Ent said…
Whats good DJ HERON just want to share a hot jam with u call SHE THROWED by SP DA DON, check it out @ http://www.box.net/shared/b1amgbv1yy fuck with me on twitter
@ http://twitter.com/fastmoneymusic and i follow u back

WHERE CARLTON WADE WILL BE SEEKING THE HOTTEST TALENT TO FEATURE IN THE UPCOMING ISSUE OF THE SOURCE MAGAZINE
WHERE STEVE RAZE WILL BE LOOKING FOR THE NEXT NEW SOUND TO FEATURE ON ALLHIPHOP.COM
WHERE THE CASTING DIRECTOR OF BET'S 106 & PARK WILL BE SCOUTING FOR TALENT TO COMPETE ON WILD OUT WEDNESDAY!
WHERE OSIRUS MAY WILL PICK MUSIC TO PUT INTO ROTATION ON SWURVRADIO.COM
WHERE MTV'S JAYSON RODRIGUEZ, ROLLING OUT NEWPAPER'S TERRY  SHROPSHIRE & RED BULL AMERICAS NATIONAL URBAN BRAND MANAGER CARLOS MCCULLERS & SIRIUS RADIO'S SOREN BAKER WILL BE GIVING UP THE GAME

Tommy (King-T) Eaton, Director of A&R/ Marketing & Promotions - N.A.R.S. Records/ Danjahandz Muzik said…
Whats good my dude. Hit me with your contact info so we can build. Also, ad me as a friend. My email address is eaton2g@gmail.com, my blackberry is eaton2g@vzw.blackberry.net