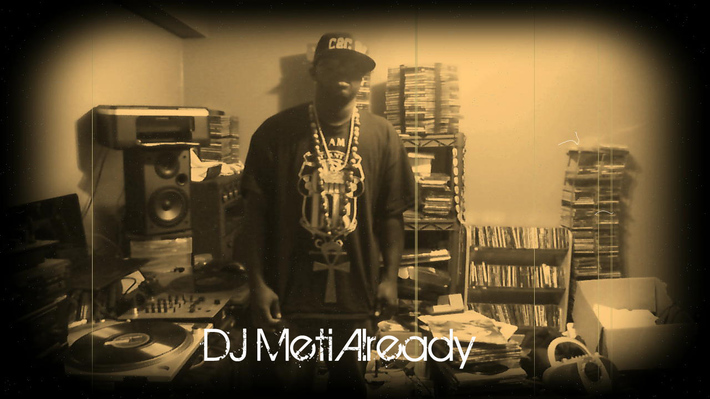 DJ Meti Already aka MetaFakta has not received any gifts yet

Welcome to The Core DJ's Network! What is your Name? (PHOTO IS MANDATORY)
DJ Meti Already aka MetaFaktaa

How did you learn of The Core DJ's Network?
I learned through another one of the Core DJs

MetaFakta was born on the south side of Chicago in a musical household. His parents always had music around him. All the popular R&B soul artists got played while he was growing up. But, it was his fathers jazz and reggae collection that really intrigued him. In his early years, he was so infatuated with his fathers turntables that they had to get him his own at the age of three. He played his vinyl constantly that it would annoy his parents. Young MetaFakta took care of his records. This is something that the average three year old would not do. In grade school he was fascinated with the piano so he took a few lessons. At that time, practicing piano was boring to him, so he pushed it aside. It wasnt until a trip to Memphis Tennessee, at the age of 12,that his fascination with the piano resurrected. All it took was to see someone play something he was familiar with. That song was Lets Wait Awhile by Janet Jackson.


When he got back to Chicago, he began teaching himself to play by ear. Making music took a backseat again until the age of 19 when long time friend Key Dig introduced him to DJ R Cue Tech and DJ Averi Minor. Hip Hop has always been MetaFakta's first love and to find out that these guys were actually making tracks for it blew him away. He watched and learned how tracks were created and crafted, and then he went away to school. At Illinois State, he met his future wife and she was the one who encouraged him to actually pursue production. MetaFakta began going to music stores, making a beat on the keyboards, and going home. This began to get frustrating creating so much music and not keeping it. His parents eventually bought him a keyboard, a computer was purchased, and the appropriate software was given to him. With the computer and keyboard, MetaFakta ended up recording two compilations and one album while away at school with local artists from Chicago and Bloomington Illinois.

After MetaFakta and his wife Tamekia completed their degrees, they moved back to Chicago. When he moved back to Chicago, he got back in touch with one of the guys who helped influence him, Averi Minor. Averi invited him to be a part of Spin Club Media Group as a producer and DJ. As a producer in Spin Club, MetaFakta will provide pristine production to any artist willing to work with him. His ear for remixing has garnered him much praise between DJs in Chicago and Bloomington Illinois. His remixes have received radio play and features among prominent DJ websites. For those looking to get that next sound, within a remix or original recording, MetaFakta is a guy willing to step up to the plate and take a swing for the rafters musically

Martha M @M3PAServices said…
thanks for adding mixes to site! that makes it Meti Monday every day lol

hey you have to show me how to get a tv channel box feed on here or fb please! i like the Dom Rep channels :)

Martha M @M3PAServices said…
thats a great blend of Syleena Johnson! she has a page here too!

Martha M @M3PAServices said…
oh wow that playlist is great, adding to my list :) thanks!

Martha M @M3PAServices said…
good to hear you keeping busy :) use the chat box on front page, its really cool!

brianvianna said…
meti already check out my artis i like to get you records radio/club tracks hit me up at brianvianna@ymail.com thxDelete Comment