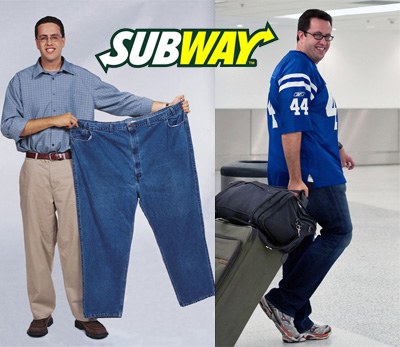 Is Subway healthy? If you view it as better than McDonalds, you might want to rethink that assumption.

If you watched the London Olympics last summer, you saw – every couple of minutes, it seemed – a parade of top athletes touting the nutritional qualities of their favorite eatery: Subway. Watching Apolo Ohno or Robert Griffin III bite into a veggie footlong with avocado or hearing that Subway is “the official training restaurant of athletes everywhere,” you might get the idea that the sandwich restaurant isn’t that bad for you – healthy, even.

Researchers from the University of California Los Angeles found that despite claims to the contrary, Subway is just as unhealthy as the oft-reviled golden arches of McDonald’s – which was surpassed in 2011 by the sandwich chain for most stores in America.

“Every day, millions of people eat at McDonald's and Subway, the two largest fast food chains in the world,” Dr. Lenard Lesser, who led the research while a Robert Wood Johnson Foundation Clinical Scholar in the department of family medicine at the David Geffen School of Medicine at UCLA and the UCLA Fielding School of Public Health, said in the UCLA statement. “With childhood obesity at record levels, we need to know the health impact of kids’ choices at restaurants.”

Lesser – who is now a researcher at the Palo Alto Medical Foundation Research Institute – did so by recruiting 97 adolescents ages 12 to 21 to purchase meals at McDonald's and Subway restaurants at a shopping mall in Carson, CA. The young people consumed an average of 1,038 calories at McDonald’s. They consumed an average of 955 calories at Subway – a statistically insignificant difference from McDonald’s. The Institute of Medicine recommends that students consume no more than 850 calories in school lunches.

While total calories were slightly lower at Subway, the average calories per sandwich purchased and sodium content were both higher at Subway. The Subway sandwiches contained an average of 784 calories, versus 572 at McDonald's. The sodium content at both restaurants was three times higher than the IOM recommended daily dose: 2,149 mg at Subway versus 1,829 mg at McDonald's.

Fast Food Gone Wrong: 5 Gut-Busting Innovations
While the results may surprise the average consumer, they did not catch nutritionist Lisa R. Young off guard. At fast food restaurants commonly thought to be healthier, Young says customers may even eat worse than they would at a chain thought to be less healthy – a phenomenon known as the “health halo.” Because diners assume they’re eating healthier overall, they may not pay close enough attention to the nutritional content of what they’re ordering. And at the end of the day, Subway and McDonald’s are still fast food.

“I do not recommend fast food if you want to eat healthy,” says Young, author of The Portion Teller’s Diet. “With a few exceptions, fast food is still fast food — high in fat and calories.”

Does it surprise you that Subway is just as unhealthy as McDonald's?

Personally, I think that the huge amount of bread and the cheeses along with various sauces is what adds to the Subway calories. Especially when ordering a 'footlong' of anything there.

I actually lost 10 pounds years ago from eating a six inch grilled chicken on wheat bread with just a smidgen of honey mustard and hardly no cheese everyday with an oatmeal cookie and a small sprite.

Of course the rest of my day was followed by drinking from my 32 ounce water bottle.

I still hit Subway every blue moon, and order in moderation and I have maintained my weight without fail.

Even if I breakdown and go to McDonald's every once in a BLUE blue moon, I only oder the modest of sandwiches with no fries (maybe a side salad) and a diet beverage.

The commercials are what get U when they throw the biggest meals and combos your way to attract U, but U DO NOT have to eat them.

Moderate your meals,...that's the key.

Tony, thanks for posting this, I always though Subway was better!