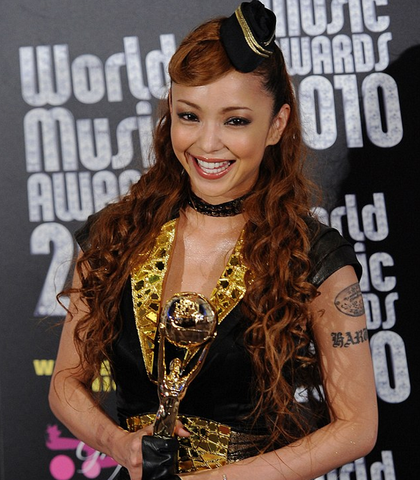 (BlackMediaScoop) Popular 90s pop group TLC recently re-recorded their biggest hit Waterfall. And much to the dismay of Lisa ‘Left Eye’ Lopes’ family, the new version has excluded the late singer from the track.

Instead of keeping Left Eye, who died in 2002, T-Boz and Chili replaced her voice with Namie Amuro, a Japanese pop star (seen below). What was intended to be a celebration in honor of TLC’s 20th anniversary has instead upset extended family members. Lisa’s sister Reigndrop Lopes said: ‘I did not know about it until a fan posted it online. I mean it would have been nice if they would have given us a heads up before being surprised.’

Reigndrop said her mother was shocked and hurt as well, because she felt as if keeping Lisa on the song would have honored her daughter’s memory.

Lisa died from neck and head injuries in a car accident in Honduras in 2002. The song Waterfalls was released in 1995 and spent seven weeks at number one on the Billboard Hot 100 list.