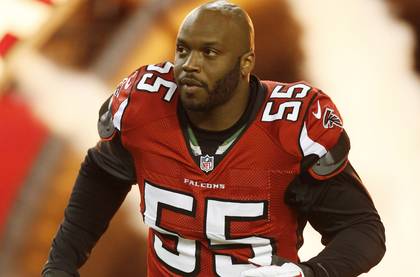 Atlanta Falcons defensive end John Abraham is free on bond Tuesday after being arrested on misdemeanor charges when authorities say he refused to leave an area taped off by police.

Fulton County jail records showed Abraham was released from custody Tuesday at 1:24 a.m. on a $7,000 total bond, or $3,500 for each of two charges of obstruction from Monday night.

The arrest of Abraham, the team’s top pass rusher, came one week after running back Michael Turner’s drunken driving arrest. Turner, also charged with speeding, was allowed to play in Sunday’s 27-3 win in San Diego.

The Falcons are off on Tuesday and there was no word from the team on Abraham’s status for Sunday’s game against Carolina.

Falcons spokesman Reggie Roberts said Tuesday he did not expect a comment from the team on Abraham’s arrest before coach Mike Smith has his normal news conference on Wednesday.

The Falcons said late Monday the team was gathering more information on the incident.

Abraham’s arrest came after Atlanta firefighters and police responded to a report of a female threatening to jump from a hotel window Monday night, according to Officer K. Y. Jones.

Officers were moving people away from the scene when Abraham entered the taped-off area, Jones said.

Jones said Abraham “was confronted by an Atlanta firefighter who repeatedly ordered him to leave the scene.”

“Mr. Abraham refused to leave and nearby officers had to respond to Mr. Abraham’s location,” Jones said. “The officers also ordered Mr. Abraham to leave and he again refused and insisted on continuing further into the scene. Officers then took Mr. Abraham into custody.”

Jones said the woman did not jump.

Abraham, 34, is the NFL’s active career leader with 114 sacks, including two in the Falcons’ 3-0 start. He led the team with 9½ sacks last season and remains a key starter.

Abraham, a free agent after last season, signed a three-year, $16.72 million contract to remain with the Falcons. He spent his first six NFL seasons with the New York Jets. He set a career high with 16½ sacks with Atlanta in 2008.