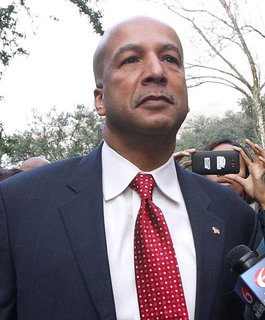 NEW ORLEANS — Former Mayor C. Ray Nagin of New Orleans was found guilty on Wednesday of accepting payoffs for city contracts, becoming the first mayor in the city’s history to be charged and convicted of corruption.

The jury, deliberated for about six and a half hours in total before finding Mr. Nagin, 57, the Democratic mayor for two terms and the face of the city’s leadership during the Hurricane Katrina disaster, guilty in 20 of the 21 counts against him.

Tania Tetlow, a Tulane University law professor and a former federal prosecutor, said Mr. Nagin could receive a sentence of as many as 20 years under federal sentencing guidelines. He will remain free on bond until sentencing, but was placed on home detention.

After the verdict was read, Mr. Nagin stood at the defense table, his hands in his pockets; his wife wept as she sat in the front row of the gallery.

The verdict came after a seven-day trial, during which more than 30 witnesses testified, including some businessmen who had pleaded guilty to bribing Mr. Nagin in return for contracting work with the city. The most compelling days of the trial, and the ones that filled a courtroom that was half-empty most of the time, were those when Mr. Nagin himself took the stand, sparring with the prosecutor and dismissing the charges against him as misleading and misinformed.

With multiple witnesses and an extensive paper trial, federal prosecutors described a sequence of transactions between the mayor and various business interests, all following a similar pattern. The owner of a company would be trying to get city work, and would at some point make contact with Mr. Nagin. Mr. Nagin would ask for a favor, often in the form of payments to the granite countertop business Mr. Nagin ran with his two sons.

Sometimes the perk for Mr. Nagin would be less direct than cash — a trip to Jamaica or Hawaii or Chicago, free cell service for his family or shipments of valuable granite slabs. But around the same time that Mr. Nagin received money or something else of value, the businessman would be awarded contracts for city projects, or would find that certain municipal obstacles had gone away.

In all, prosecutors said Mr. Nagin received more than half a million dollars in illicit benefits, while the contractors found themselves with millions of dollars’ worth of city work.

Mr. Nagin had argued that the payments were legitimate investments in the granite business, which he said was managed and run by his sons, with himself as a passive investor. He said that the contracting process was largely out of his hands, awarded either by a public bid process or selected by a special committee. And he said that much of the documentary evidence highlighted by prosecutors was prepared by someone else — his lawyer, his personal assistant, the city attorney or his accountant.

This hands-off argument was undercut by emails and testimony tying Mr. Nagin directly to some deals, though it did fit a larger theme of the mayor’s time in office. By the end of his second term, in 2010, many in the city had come to resent what they saw as a casual indifference on Mr. Nagin’s part during the most demanding years any American city has known in recent decades.

I am sure this will be construed as a prosecution based on race and all the reverse racial discriminators will come out of the woodwork.

" . . . the first mayor in the city’s history to be charged and convicted of corruption." Yaowzer, what have they been doing? Are there ..

While most New Orleanians had become frustrated with Mr. Nagin’s performance, few thought of him as corrupt until well into his second term, when investigative bloggers and newspaper and TV reporters began uncovering deals that would later form the backbone of the government’s case.

In 2009, before Mr. Nagin left office, his former chief technology officer, Greg Meffert, was charged, along with his wife and a technology vendor who worked with the city, with bribery, fraud and conspiracy. Mr. Meffert pleaded guilty in 2010 and testified for the government during Mr. Nagin’s trial.

Several other businessmen who had pleaded guilty to bribery involving city contracts also testified against Mr. Nagin. Home Depot executives were called as witnesses and described Mr. Nagin’s campaign to give work to his family business, as they were trying to negotiate with the city for the location of a new store

Among the more riveting parts of the prosecution’s case were several exchanges involving the less sensational charges of filing false tax forms. Mr. Nagin had been in such financial straits, that a friend of his, who also testified, had paid him thousands of dollars a month, adding up around $80,000, none of which was claimed as income. Further, prosecutors confronted Mr. Nagin on the stand with a long list of receipts for expensive dinners that appeared to have been on personal occasions, such as his wedding anniversary, but were charged to the city credit card.

Mr. Nagin countered that during personal dinners he was often approached by someone with city business, changing the nature of the occasion.

“Let me explain being mayor of New Orleans to you,” he said from the witness stand. “It’s a full-time job. There’s no time