No Answer For Roy in Blazers Win; Plus the Cavs and Lakers Hold Off Their 8th Seeded Attackers 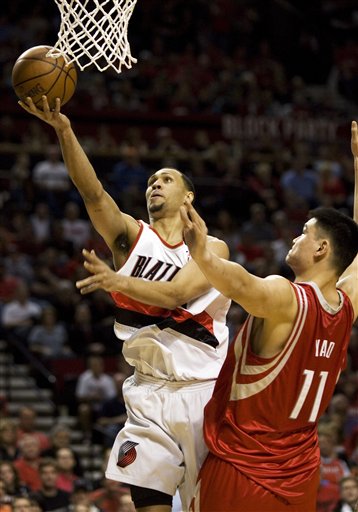 There were three playoff games on display last night for your viewing pleasure, and if you missed last night then you only missed one worth talking about. We had the Lakers taking on the Jazz in game 2, as well as the Cavs battling the Pistons in their second game of the series. But the one that most people anticipated watching was the Trailblazer battling the Rockets in their second game.
In game one Aaron Brooks led the rockets to a 27-point victory, scoring 27 points of his own. Yao Ming had the perfect scoring night shooting 100 percent from the field and the free throw line scoring a total of 24 points. Portland knew Yao wouldn’t have another perfect game so they focused their attention to Brooks, and decided to try and make Houston spread the ball around.

Well this time Brooks went for 30 points, but that was towards the end of the game when Houston was trying to comeback, with 90 seconds left in the game. Portland had already had an 18-point lead, and closed the game out by hitting their free throws and taking the game 102-103.

The story of last night was Mr. Brandon Roy and his 42 points, which tied a Blazers playoff record. He displayed the type of performance that most basketball fans were expecting from him in his playoff series debut. Each basket he took was a big shot and he knocked them down including a big three pointer late in the 4th quarter to extend Portland’s lead to six, and they never looked back from there.

Lamarcus Aldridge was impressive as well, coming out hot in the first half scoring 16 points, with 12 in the second quarter. He finished with 27 while grabbing 12 rebounds.

The downfall for Houston was their lack of feeding the ball to Yao down the stretch. He had 11 points, but only took 6 shots. It was another case of a team having a big man that can take you on to victory, but instead the guards want to show the world that they can shoot. Unfortunately for Houston they only hit 35 percent of their shots from the three-point line, and it would have been worse, had it not been for Brooks shooting 4 of 5 from beyond the arch.

The Blazers and Rockets were pretty much neck and neck in all team statistical categories with the exception of their 3-point shooting which ultimately cost them the win. The Rockets didn’t play bad ball, as a matter of fact Von Wafer scored 21 points and Ron Artest donated 19 to the Rockets cause, but they just didn’t have an answer for Roy.

Also a factor that could affect the Rockets later on in the playoffs is the loss of Dikembe Mutumbo who left the game in the first half with a knee sprain. Very reminiscent of Alonzo Mourning going down with his injury in Miami, at 42 years old this could have very well marked his last season. If that is the case then I have to say Dikembe thank you for what you contributed to the game of basketball.

Getting back to that Lakers & Jazz matchup, Los Angeles had better learn to tighten up on defense, because for the second straight game they let Utah hang around, and last night it almost cost them. The Lakers led by 15 points early in the 4th quarter, but allowed the Jazz to get back to within 3 points led by Darrin Williams who scored 35 points, a career playoff high, and Carlos Boozer who had 20 points and 10 assist. However Los Angeles turned it on and won the game 119 to 109.

Kobe Bryant had 26 points and 9 assist, Pau Gasoil added 22 points, and Lamar Odom came off the bench to add 19 points. At the end of the day Utah just doesn’t have the defense to defend all of the different weapons that the Lakers are throwing at them. Game 3 takes place in Utah where they are a much better ball club, and they’ll hope to push this series to at least a game five with a win.

The last game of this discussion was the first game of the night. The Cleveland Cavaliers taking on the Detroit Pistons in their second game of their best of seven series. Up by 29 in the 4th quarter the Cavs almost donated a game to the Pistons, by allowing them to get back to within 7 points. At that time the NBA’s 2009 coach of the year Mike Brown had to put Lebron James back in to insure the Cleveland victory, and he did with a final score of 94-82.

James had 29 points 13 rebounds and 6 assist and Mo Williams added 21 more points. James wasn’t happy with the team’s fourth quarter effort saying, in the playoffs opponents will use that 4th quarter as momentum going in to the next game, and they just can’t play like that again. He also went on to say that they wouldn’t let last night’s fourth quarter performance erase what they’ve done in the playoffs to
this point.