[WOW] Is Donald Trump's Campaign Creating Spam Accounts to Support Him on Twitter? If you’ve ever found yourself in the uniquely satisfying position of writing or tweeting something critical of Donald Trump and his lowest common denominator presidential campaign, then you may have noticed your mentions quickly deteriorating into an intellect-sabotaging dumpster fire. Though plenty of these grammatically insufficient accounts do belong to people who are indeed real (nightmarishly real), astute Twitter users have started noticing that at least some of these would-be Trump supporters are just spam accounts tasked with tweeting the same exact shit over and over again: 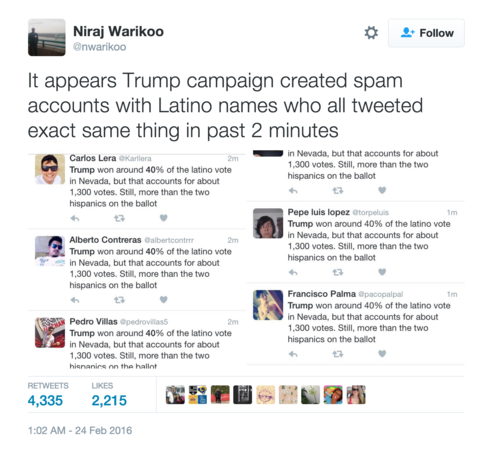 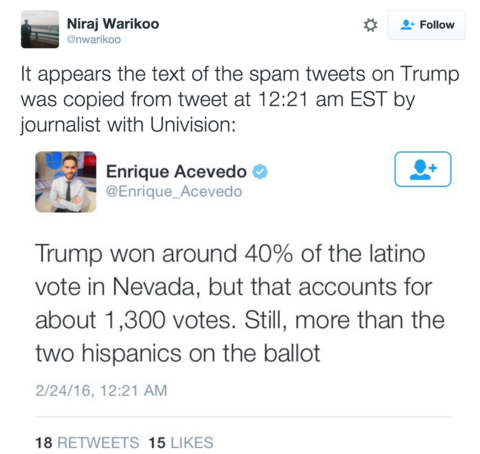 Still not convinced? There’s even more: 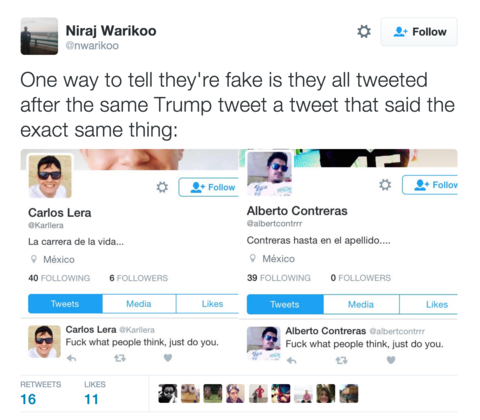 "It’s going to be an amazing two months," Trump said during his Nevada victory speech, according to the New York Times. "We might not even need the two months, to be honest." With a presidential campaign practically built on the xenophobic platform of flipping blatant racism into some sort of perverted virtue, the irony of Trump’s campaign possibly beefing up their Twitter action with fake AF accounts to project the appearance of multicultural support is profound (and deeply unsettling).

However, as anyone currently in possession of a fully functioning brain can attest, Trump’s own Twitter account needs no embellishment to cause immediate offense by further strengthening a reawakened core of voters concerned solely with the protection of racist ideologies. On more than one occasion, Trump has tweeted or retweeted Nazi imagery and related rhetoric to the immediate co-sign of millions of Twitter followers.

Trump, however, seems fully aware of exactly who is drinking his tainted Kool-Aid. "We won with poorly educated," Trump told reporters on Tuesday, according to Gawker. "I love the poorly educated." In fact, CNN notes that Trump did indeed poll higher in Nevada than any other candidate among those with a high school education or less. Sadly, Trump is expected to continue taking advantage of those with a limited education as the race for the White House becomes more and more depressing with each passing day.