Where Do The Hornets Go From Here 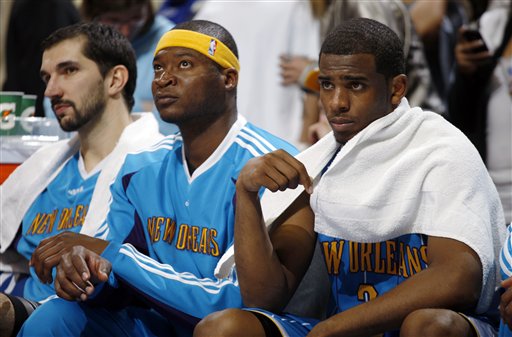 The beat down that the New Orleans Hornets took in the playoffs, at the hands of the Denver Nuggets, have many people wondering, "What happened to the Hornets we saw last year". It was just a year ago that we witnessed New Orleans beat down the Mavericks, and push the then defending champion Spurs to seven games. This was a team on the verge of breaking out and becoming one of the NBA’s elite teams.
This year we saw a completely different team. The Hornets lost 10 of their last 13 games including the playoffs, and last night was an example of how New Orleans season has gone all year, inconsistent. Chris Paul maintained his high level of play, but he seemed to be the only one. David West who broke out last year, and was named to the all-star team two years in a row, couldn’t find his groove. And Tyson Chandler never seemed comfortable due to his injury, which kept him out most of the season.

All the blame can’t be put on New Orleans for their performance though. Denver played extremely good basketball, and knew that if they contained CP3 then the rest of the team would fall. And that’s exactly what happened. CP3 was forced to do it all for this team in this series and that’s a lot to ask of a 6’1 point guard. He had to be the guy putting up all the points, distributing the ball to everyone, and D up one of the best players in the league in Chauncey Billups.

I’m not saying it’s a mission that’s impossible, but when your only 6’1 it can be extremely difficult, especially with out help. And unfortunately Paul had no help this time around with the roster being the major factor in the Hornets demise this year, and you can expect some changes in the off season.

Last year the true x factor was the spark provided by Jannero Pargo off the bench, as well as a healthy Tyson Chandler. This year when Paul would go to the bench the Hornets didn’t know where to turn for offense, and it was evident against the Nuggets. Another issue was they just didn’t have the personnel to play defense against the multiple weapons that Denver had.

Peja Stojakovic was brought in a few years ago to spread the defense and knock down open three’s when the ball was kicked out to him, but he too was inconsistent. This was the same reason Rasual Butler was resigned, his three point shooting, and ability to get to the basket, but he too could never quite get on track. With the addition of James Posey the Hornets on paper looked poised to continue where they left off last year, but it never translated to the court.

Next season the Hornets will have to find a legitimate shooting guard, that other teams have to plan for and another point guard to keep them in games while Paul is on the bench or dealing with injuries. They also need more help in the paint, due to Chandler’s injuries, which have affected him since he’s been with the Hornets. Every year the Hornets seem to get bit by the injury bug in the front court, and have to rely on Hilton Armstrong, who simply isn’t getting it done.

And for a real threat they should try to surround Paul with a few more shooters, much like the Suns had during their run and gun days. That was one thing that made them so dangerous, when Steve Nash would penetrate he had the option to dump it off inside or kick it out to a shooter. This kept every team on their heals and spread out defensively. The problem with the Suns was they had no defense, a problem that Coach Byron Scott won’t have.