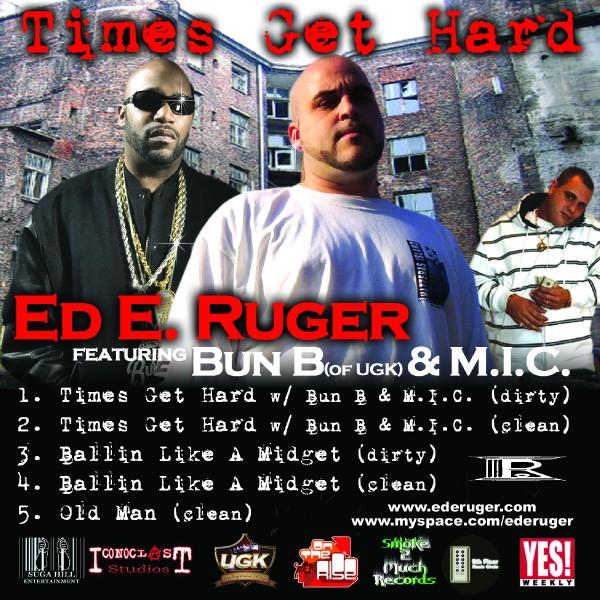 ED E. RUGER has not received any gifts yet

Give ED E. RUGER a Gift

Welcome to The Core DJ's Network! What is your Name? (PHOTO IS MANDATORY)
C:\Documents and Settings\Owner.HOME-01NIGATFDA\My Documents\My Pictures\times get hard.jpg

What is your PURPOSE for JOINING the CORE DJ RADIO NETWORK?
Gettin my music heard by the masses!

From the triad’s capital, Greensboro, North Carolina comes the best recipe for a spectacular, fresh yet familiar emcee, who has easily been coined as “The New Breed Of Hip Hop.”
Ed E. Ruger has been showcasing his energetic and vivid rhyming talents with an unmatched grind and work ethic.
Starting out as a battle rapper his in your face freestyles blended in with his crowd hyping ability took over the North Carolina underground by storm. With his never ending hunger for his music the storm has yet to be silenced, in fact it just gets bigger. Ruger claimed the top spot at the 2002 Rhyme Warz as their champion and with that he knew he was born to be on stage with a microphone in his hand.
Averaging two live performances each week, Ruger is a definite crowd pleaser, which has earned him vast recognition as a Carolina household name.
His freshman album, “Shots From The Ruger” (Suga Hill Entertainment) received immediate acclaim with his single “Old Man” in which Ruger reflects on his life and the struggles he has had to face.
The New York City based Wonder Twinz placed Ruger on the “Who Got Next?” section of their nationwide publication reviewing the album claiming, “…this is a great collection of diverse styles and a must have for all true heads.” The album boasts main production by the only undefeated “Reign Supreme beat battle” super producer, Double J The Jenius (Iconoclast, Boondocks, Adult Swim, Sony, Shady/Aftermath, Cartoon Network Etc.) These groundbreaking beats compliment Ruger’s vivid flow with perfection. Since the release of “Shots From The Ruger” Ed E Ruger has opened up for the biggest names in hip hop, from underground kings, to founding fathers of the game. Sharing the stage with the likes of KRS-One, Public Enemy, The Wu Tang Clan, The Clipse, Project Pat, The Ying Yang Twinz,Mac Lethal(Rhyme Sayers),Cassidy,Coolio,Black Sheep,Project Born and the rap/rock group Rehab just to name a few.
Ed E. Ruger has also recorded tracks with Stat Quo, Bun B of UGK, Haystack, Krumbsnatcha (Training Day Soundtrack and Gangstar Foundation), Bekay( Rawkus), Pistol (Ruthless Records) and some of North Carolinas finest emcees, the late Trey Stylez, Meta4 The Great, Celinski, Illpo, ethemadassassin,Kotix,Stitchy C, Ty Bru and L.I.V.E. which are included in his most recent released project, “Reloaded” or off of his upcoming albums,"Lights Out" “The Token.”
DJ ‘s that reach as far away as France keep Ruger in regular rotation and he has been a featured artist on Sirius Radio channel 40, Hip Hop Nation and he was also on the first track of DJ Modesty’s monumental 100th show in late 2007.
Ruger has been featured over 500 mix cd's,120 radio stations & 325 websites worldwide,as well as in numerous publications such as Down Magazine, Go Triad, The Connex List, and Yes! Weekly.
In his newest project, “Brown Bag Special” (Early 2008) he teams up with another talented North Carolina rapper, Ty Bru for an exclusive album molded around just the two.
This is not the first time they have worked together; Ed E. Ruger was featured on two tracks on Bru’s 2007 album, “On The Brink”(Mightier Than The Sword Records) which was a top 5 finalist for best hip hop/rap album in the 7th annual worldwide Independent Music Awards.
As the latest reward for all the work Ed E. Ruger has put in, he was nominated for the 2009 Grind Hard Award at the North Carolina Underground Music Awards.So,as you can see,this is only the beginning of a long & prosperous career for Ed E. Ruger who many have labeled "The Voice Of Carolina"


“Out in the pastures of North Carolina, Ed E. Ruger has been planting his verbal seeds for years. Now, with a full crop for the masses, he’s here to present his newest album, “Shots from tha Ruger”. Just listen to his energy backed with the heavy track on the intro and you’ll know what your in for with this album. Like many blunted lyricists before him, Ed E. pays homage to his special little green friends that continue to give him inspiration on the track cleverly titled, “The Weed Song”. “Change” featuring fellow Carolina veteran, Metaphor the Great, is another hard hittin’ song that’ll keep ya head snappin’. Without a doubt, my favorite song is “Old Man”. It’s a track in which Ed E. reflects on his life and the struggles he’s had to face. With one listen, you’ll be able to put yourself in his shoes. So all in all this is a great collection of diverse styles and a must have for all True Heads. So holla at Ed E. Ruger and support your own.”
-Reviewed by: The Wonder Twinz / Publication: The Connex List vol. 21


“Greensboro native Ed E. Ruger began his career at the ripe age of 16 and has been on the grind ever since. Ruger's full-length release, "Shots From Tha Ruger," already has received plenty of buzz. His battle-style raps come straight at you from the first track. The claim of being North Crunk's Finest is backed up with witty metaphors and punch lines that flow over hard, street-influenced beats.
The majority of the tracks on this album are ready to bang in the club. Ruger steps out on "Old Man" and speaks about personal issues. "Old Man" is a track that a lot of people can relate to and find some closure to their own problems. This track was made by one of the Boro's best producers, Double J, who chops up a classic track from a Canadian rocker. The production, the delivery and the message of "Old Man" make this a classic track from one of the hardest-working MCs in Greensboro.
Overall, "Shots From tha Ruger" is a commentary on the scene in the Triad and one MC's journey in it. There are plenty of appearances by the likes of Celinski and Ill Po, not to mention the late, great Tre’ Stylez.”
-Reviewed by: Scoop - www.heavycontact.com /
Publication: Greensboro News & Record “Go Triad” (August 14, 2006)


-----Culture VI-----
Ed E Ruger - Shots From The Ruger 17 Jan '08 - 4:39am With this being the second album recieved from Ed E Ruger, and just like any other artist, i figured i would be able to point out certain trends artist develop as their career progresses. Shots From The Ruger would end up being an exception to that thought, bringing a whole different feel for an album, but yet maintaining the same hungry approach since the first time i heard the up-and-coming artist hailing out of North Carolina.
Usually, when artist come out of the same city, state, etc. they tend to adapt each others styles, but then manipulate it with their own twist and feel to generate a stamp you can recognize with little notice. This guy is about as genuwine as it gets, and very uncomparible to other artist from his area, such as Little Brother. Thoughout the album he touches many aspects of todays hip-hop genre, stretching from your everyday radio friendly commercial sound, the new day in age hip-hop with the southern twist, to your reminiscent 90's feel we all once loved. Songs like 99 Richochets & It's A Rap are found in the first quarter of the album, and open it up with a rugid feel you could find mostly on his other release, titled "Reloaded". Through the middle of the album, you find Ruger hit you with the more serious tracks, such as Old Man & Voices, then with one more heartfelt jab towards the closing with Holdin' On.
2 humorous skits throughout the album break up the tempo, and the Outro will definitly leave you with the "I need more of this guy" feel.

comptongutter said…
WHAT UP WIT 'CHA ! THANKS FOR THE ADD THAT'S REAL BIG. MAKE SURE U PICK UP OUR NEW MIXTAPE 1000 BARS & RUNNIN FEATURING 66 ARTIST FROM THE CITY OF COMPTON AND A FEW FROM NEAR COMPTON SPITTIN A HOT 16 BARS WITH SO MUCH TALENT ON THE CD IF U NOT PEEPIN YOUR SLEEPIN. SO WAKE UP !!! THIS IS A MUST HEAR ALBUM. HIT MY EMAIL(COMPTONGUTTER@GMAIL.COM) AND I WILL GET ONE TO U ASAP. ALSO STAY ON THE LOOKOUT FOR 1000 BARS MIXTAPE DVD COMING RIGHT BEHIND...PEACE