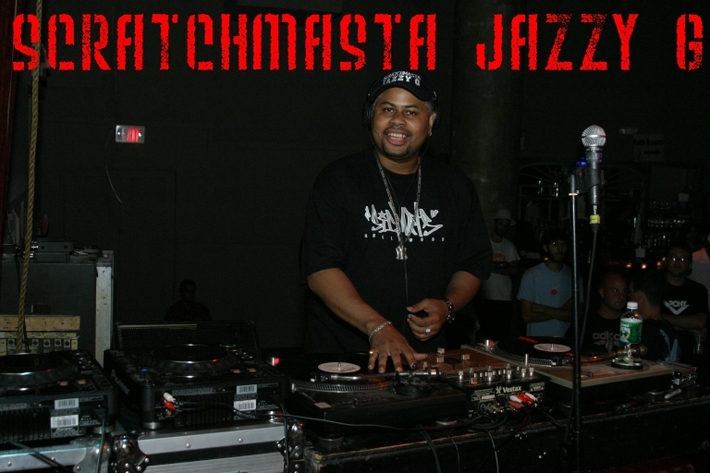 SCRATCHMASTA JAZZY G has not received any gifts yet

What's Your Title/Business (What do you do?)
RADIO/MIXTAPE/TOUR DJ & REMIXER

Hey People, SCRATCHMASTA JAZZY G has invaded COREDJ RADIO.COM now. I'm from the South Bronx, NYC. I've been spinning since the age of 12.I was Curious About Mixing By Watching A DJ crew Called C.C. & COMPANY(COOL CLEE,DR. DUSS,JAZZY J,TROY ROY,MONEY MIKE,PHILLY PHIL & KENDU R.I.P.) In My Projects (MILLBROOK PROJECTS).I Later on got Familiar with The Crew. I Learned The Art Of Mixing By My Teacher The ORIGINAL MIXOLOGIST DR DUSS,Later on I when to learn other Tricks & Styles on my own. I 1ST got in the game professionally by 16. I Am A Member of THE B-BOYS(DONALD D & BROTHER B). I have also SPUN for The Elite Force (Female Version of P.E.,POSITIVE K,FRICK & FRACK,CIPHER SOUNDS,.When ELITE FORCE Disbanded I later went Into the studio. With a Former Member now known as QUEEN MOTHER RAGE Of X Clan. Special thanks to PROFESSOR GRIFF Of PUBLIC ENEMY.I Hooked Up With A Group Based In South Jamaica,Queens Called The LETHAL WEAPON (MC WORLD,DON JUAN,WILL SEVILLE,DESTRUTION,BIG BO) We Recorded Two Singles & A Album. We Did A U.S. Tour. Special Thanks To DERRICK MILES & MONEY D OUR MANAGERS.I Then Relocated To UTICA,NY. Where I Lived For Seven Years. I Then Connected With Another BRONX,NY Representer (EDENWALD PROJECTS) PRIME MINISTER LEW FRESH. We Have The NUMBER #1 Radio Show In The City For FOUR YEARS STRAIGHT!!!! MAD LOVE GOES OUT TO THE TAYLOR/CARTER FAMILIES. ALSO TO THE MIXSQUAD ALLSTAR DJ'S. I’m also one of the tour DJ's for the ULTRA MAGNETIC MC'S. I entered the DMC battle in NYC and got to the semi finals and got eliminated by default VS Lighting Rich from Philly (Broken Needle), but that didn't stop me from competing again. I turned around & was a contender for the NMS battle. I Presently DJ at Various Clubs & Radio Stations Now. I’ve held Residencies at Latin Quarters-Nyc, Club Sensations-Newark, NJ, Nowhere City-Syracuse, NY & Curly's Rome, NY. I have spun at Union Square-NYC, Mars 2112- NYC, Black National Theater- NYC, Stereo-NYC, Duvet-NYC, Plumm-NYC, The Copacabana-NYC,The Remote Lounge,NYC and Vells-Cleveland, Ohio.I Do Various Radio Shows WPNR 90.7 UTICA NY WITH MY Pardner Prime Minister LEW FRESH AS THE NEW YORK BAD BOYS,WHCR On THE THERMAL SOUNDWAVES SHOW WITH C TRUTH & KEV LAWRENCE,I DID SOME GUEST APPEARENCES ON SIRUS RADIO.WOW FM WHICH HAD TWO FREQUENCIES 97.9 &107.9 THAT YOU CAN LISTEN AS FAR AS SYRACUSE NY TO ALBANY NY. I'm presently working on the Unity Jam Tour for 2009. I’d like to thank all of you who visited My Page. If you have music for me to spin, leave a contact & I'll get back to you . PEACE & LOVE SCRATCHMASTA JAZZY G IF YOU NEED TO GET AT ME OR SEND MUSIC MY E-MAIL IS SMJG 1200@AIM.COM

brianvianna said…
scratch send me your email so i can get you some records mine is brianvianna@ymail.com thx

Renny Djscoop Lewis said…
hey thanks for the add man!!! so i noticed your in the bronx...when can i come get some scratch lessons lol? but seriously... :)

Storm Elements said…
Hey, thanks for your request! The tracks on my page are all produced my me.