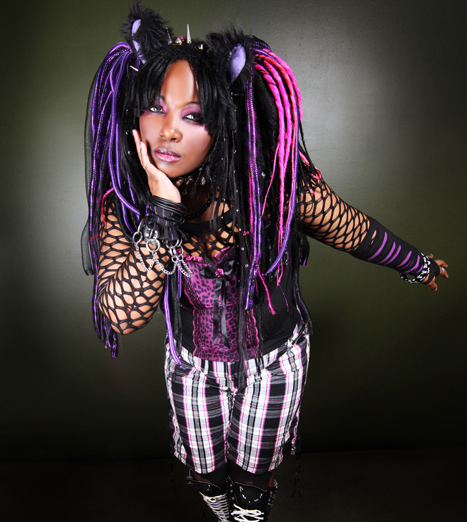 ThaGataNegrra has not received any gifts yet

Welcome to The Core DJ's Network! What is your Name? (PHOTO IS MANDATORY)
ThaGataNegrra

What's Your Title/Business (What do you do?)
alternative hip-hop artist/entertainer

How did you learn of The Core DJ's Network?
Through another member, Mr. Live

ThaGataNegrra is the world's premier PunkRhyma™-- an alternative hip-hop artist who specializes in innovative lyrics, cleverly twisted metaphors and a funky start-stop delivery that nails the listener from the word go; an eclectic style that runs the gamut from danceable ear candy to mind-searing aggression. Her distinct flow, catlike persona, and penchant for the odd not only earned GATA her feline namesake, but made her a force that is undeniable.

GATA is painted as a manga/anime character of the hip-hop spectrum; her performances lend to this by featuring cosplay and visual kei. She was colorfully described as “the bastard child of Hello Kitty and Eminem” and “what-if Lady GaGa was an mc”. Her influences range from Golden Era hip-hop and punk to dance and new wave. She has been showcased at Code of tha Cuts: Project B-Girl at Vans Warped Tour, and the Newark Festival of People among other venues. GATA's debut CD, "GATA City", releases 8-24-11.