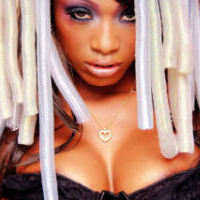 Vinyl Bitchie has not received any gifts yet

Vinyl Bitchie is not the average up and coming female producer/deejay in the industry. She's rocked the underground nation from out of no where. No one saw this explosive talent coming, but many are feeling her wrath. Not only did Vinyl's mixes, remixes, and original tracks win them over; but her charismatic, loyal, loving, and witty personality has given them more of a reason to support her.

October 21,2006 Vinyl Bitchie was interviewed by one of the biggest electronica and dance publications, which hosts female deejays and producers from all over the world, SheJay.net. This interview was released in the Winter 2006 issue. Vinyl was also featured as one of "The Sexiest Djs In The World" by M8 Magazine--a very popular UK club culture publication (The March 2007 Winter Music Conference Edition). This magazine hosts top deejays and producers from all over the globe.

The popularity of her first single "Where Should I Go" (released in 2007), encouraged Vinyl to continue producing original tracks to play in night clubs all over the Midwest.

Check out her debut album "UpBeat". Now available at itunes,AmazonMP3,Rhapsody,Naps ter,emusic, and other online stores.

What is your PURPOSE for JOINING the CORE DJ RADIO NETWORK?
I'm a core dj

What's Your Title/Business (What do you do?)
Producer/Dj/Record Label Owner