I woke up early this morning to get ready for a long Saturday. I was not sure what type of music mood I was in. I listened to a few old school hip hop tracks. Then some R&B. Since I have been a DJ for over 25 years, I have more that 15,000 songs on my lap top. Sometimes that is too many choose from. I stumbled upon one my favorite albums....Class of 3000! That's right! It is the soundtrack for the cartoon series. I bought the album for my son but I find myself jamming it when he is not around. Make no mistake, this is not the standard cartoon album like School House Rock. This is an hot album by none other than the most creative artist in music today. 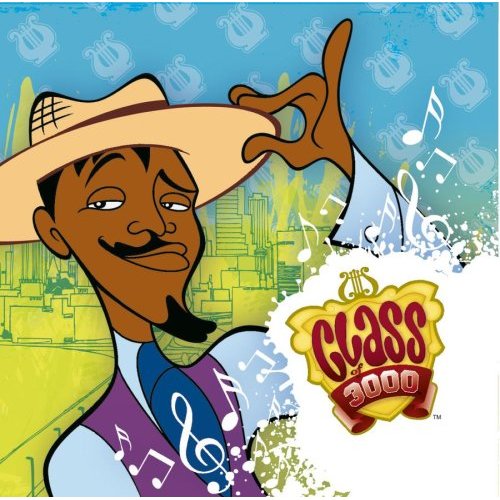 Andre Benjamin aka Andre 3000 produced an album that I feel should have won album of the year. One day my daughter was on the Cartoon Network website listening to the track "A Rich Shade of Blue". It's a song about the character in the show who is super rich. He is explaining that even he can get depressed or blue. The song reminds me of something that would have been hot in Harlem in 1930 with the Big Bands and The Cotton Club. One day I played this song at a party for grown folks and they had no clue it was from a cartoon! Many were bobbin' their heads and a few asked about the song. There are others that will have you smiling such as Peanut and the Class of 3000 theme song.

When I started spinning records back in the 80's, if you had something in your crates that no one else had, you were a cut above. Today every DJ as access to the same music. THIS album will set you apart. There is not much music that you can listen to with your kids today and have it be age appropriate and enjoyable. I highly recommend this album for the whole family.